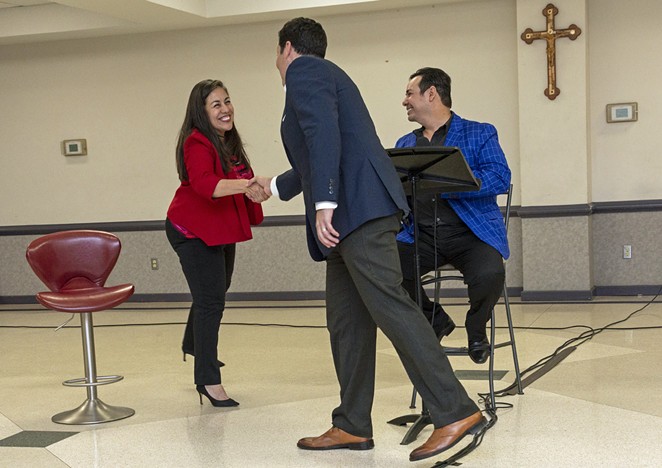 A recent debate between the two Democratic candidates for Precinct 2 Bexar County Commissioner shone a light on their widely different views of how to — or, indeed, whether they should — carry on the legacy of longtime commissioner Paul Elizondo.

Elizondo, a larger-than-life figure in the Democrat-dominated district, died in late 2018, a month after the start of his 10th term.

The candidate sitting to my right as I moderated the February 27 forum, Queta Rodriguez, ran against Elizondo in 2018, railing against the “deeply flawed system” that existed under his watch.

Her rival, incumbent Justin Rodriguez was appointed to Elizondo’s seat after his death, and many see him as someone eager to carry on his predecessor’s legacy. Rodriguez was going into his fourth term as the District 125 representative in the Texas House when he was tapped for the role.

A few days after the debate, voters chose Justin Rodriguez as their next elected commissioner, although the movement that Queta Rodriguez created was clearly influential, and the forum helped showcase stark differences in their views.

The two candidates had, by most accounts, heavily canvassed West Side neighborhoods ahead of the primary. Although both participated in a debate on Texas Public Radio, this was their only meeting before a live audience.

The tension between their contrasting views was clear in some of their exchanges.

Queta Rodriguez — who lost her 2018 runoff against Elizondo by fewer than 400 votes — took issue over her rival’s appointment, saying the selection came without community input.

“There was a complete lack of transparency,” she said. “I believe that people should have a voice in deciding who gets to represent them.”

She also told the audience that she ran in 2018 because she saw the need for “fundamental change” in county government.

“Our Bexar County Commissioners Court is made up of five people,” she said. “Those five individuals, which right now are all male, represent nearly two million people.”

Later, she added that she hoped voters wouldn’t vote for her because she was a woman, but rather because of her grassroots approach to community outreach.

“I’m not embarrassed to admit that I still live next door to my mom,” Justin Rodriguez said. “I’m a homeboy.”

He said he planned to “open the doors to county government” when he first joined the Commissioners Court. As part of that effort, he launched a campaign to answer questions about the role of a county commissioner.

The discussion became heated when the subject of campaign donations came up.

“If something is not ethical, I will not do it,” Queta Rodriguez said, adding that her opponent had connections in Austin that she “would not be happy to claim.”

By that, she was referring to the Texas Association of Realtors, whose PAC gave Justin Rodriguez a $12,500 contribution in September, according to campaign finance records.

“You’ve got to let me respond to that,” said Justin Rodriguez, who rose to his feet. “That was a direct attack on my integrity. Anyone who’s ever given me a [campaign] donation, it’s never been in exchange for a vote. I take exception to you making that allegation.”

Later, Justin Rodriguez had the chance to respond to his opponent’s talking points, arguing that she’d taken credit for his ideas.

The response drew a laugh from the audience.

The forum also touched on issues facing the district — among them preserving historic neighborhoods, improving infrastructure and services to senior citizens.

When talk turned to the San Pedro Creek flood control project, which started during Elizondo’s time, Queta compared it to the continued flooding in neighborhoods such as Los Angeles Heights.

“As I walk those neighborhoods, I get angry,” she said. “People tell me, ‘You sound angry.’ I’m not angry, I’m passionate.”

And therein lies the biggest contrast between the two.

Queta Rodriguez said she wants to make a top priority of leveling the playing field in some of the West Side’s poorest areas.

One of the final questions was whether the candidates would support redistricting to allow the GOP a shot in at representing the longtime Democratic stronghold. Both said they were open to the idea, even though the political landscape of Precinct 2 was a source of pride for Elizondo.

Ultimately, Justin Rodriguez avoided a runoff by garnering 59% of the vote. With no Republican filing, he won’t be challenged in the general election, a situation for which Elizondo deserves all the credit, or — to some Republicans — all the blame.

While the two had divergent views on Elizondo, it was clear their recent debate was a long-awaited public assessment of the milestones and shortcomings of a three-decade administration of El León de Bexar County.