Dangerous Maneuvers: The Ineptitude of Donald Trump and Dan Patrick Make Gov. Greg Abbott Look Like he’s Got COVID-19 Under Control. He Doesn’t. 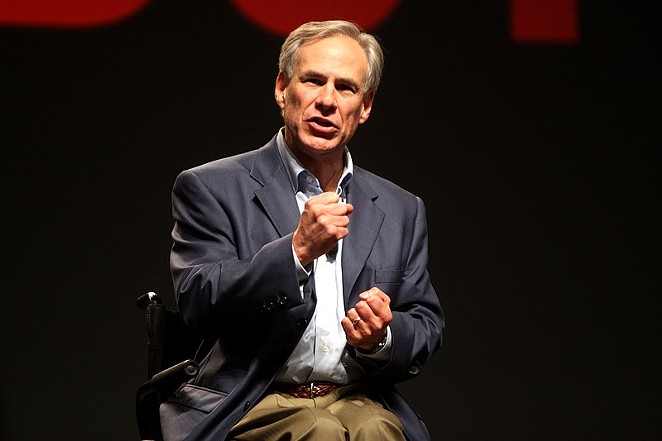 The following is Current Events, a column of opinion and analysis.

Unlike President Donald Trump, Gov. Greg Abbott hasn’t been caught on video dismissing the novel coronavirus as a hoax. Nor has he used his time at the mic for tone-deaf praise of his own TV ratings or godlike medical knowledge.

Likewise, Texas’ Republican governor hasn’t gone on Fox News like his right-hand man, Lt. Gov. Dan Patrick, to urge old people to go ahead and die so they don’t ruin the economy for their grandkids — and Wall Street.

As infections ticked up across the state, Abbott held frequent press briefings, appeared in TV spots urging social distancing and issued plenty of executive orders — some of which appear reasonable on their surface.

In short, Abbott’s not been an embarrassment on the scale of his divisive, bomb-throwing lieutenant or our reality-show president. But that’s not to say he’s done all he can to protect his constituents during this unprecedented crisis. Nor that he’s placed the wellbeing of Texans over his own political agenda.

For many, the first sign Abbott — an outspoken abortion opponent — was willing to place political points over people’s safety was his March 24 order temporarily banning abortions, except in cases where a woman’s life or health is at risk.

While Abbott justified the action by saying it frees up medical resources for pandemic response, few abortions are conducted in hospitals. It’s also nearly impossible to envision a scenario where abortion clinics would be used to treat COVID-19 patients. Worse, the order, now being fought over in federal court, could force some women to make dangerous drives out of state to obtain the procedure.

Abbott’s mishandling of the crisis came further into focus last Wednesday when he was forced to issue a video clarifying what he actually meant when he issued a murkily worded order the previous day appearing to ask residents to shelter in place.

The problem was this: the governor’s order and its accompanying press conference were layered with verbal gymnastics to avoid calling his action a “stay-at-home order,” the same language used by municipalities such as San Antonio, not to mention other states.

“This is not a stay-at-home strategy,” Abbott stated emphatically during the announcement. “This is a standard that is based on essential services and essential activities.”

It doesn’t take an astute observer of Texas politics to understand Abbott’s nebulous language meant to play both sides — taking action to limit interactions while trying to look like he wasn’t imposing a top-down solution. “Local control” has been a signature issue for Abbott during his time in office.

As Texans look to state government for clear answers on how they should respond to this crisis, Abbott’s lack of clarity isn’t just irresponsible, it’s potentially deadly.

But the most dangerous of Abbott’s political maneuvers is contained in the order itself: an exemption he carved out for churches. By designating religious services as essential, he cleared Texas congregations to gather in violation of health officials’ recommendations on social distancing.

The order provides some wiggle room for enforcement by saying that, ideally, services should be conducted remotely. It also stipulates that all in-person events should be canceled in communities “experiencing substantial community spread.” Both provisions are broad and lack legal teeth.

Abbott, an evangelical favorite, is smart enough to know religious services are capable of becoming deadly petri dishes. Authorities in South Korea placed the cult-like Shincheonji Church at the center of that country’s outbreak. Closer to home, two people died from COVID-19 after a church choir practice in Washington state that also sickened 45 of its 60 attendees.

As we look back on the pandemic, history will likely judge Trump’s mixed messages as one of the largest contributors to the scale of the U.S. tragedy. Abbott’s naked attempts to play both sides could land him on the same page.

The governor’s maneuvers during this unprecedented health crisis may qualify as staying on political message, playing to the base or taking bold steps to ensure his reelection. But they sure as shit don’t qualify as courage or leadership.