Survivor’s Struggle: After Years of Lip Service, Texas Must Make Real Progress To Provide Clemency For Survivors of Domestic Violence 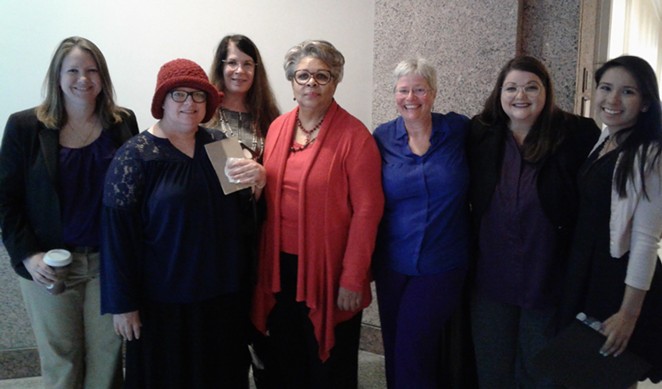 On April 4, 2019, I testified to the Texas House Corrections Committee about the need for clemency for survivors of domestic violence who defended themselves or their children. All session long, Gov. Greg Abbott signaled support for House Bill 3078, which would have created that clemency process. Then, shortly after the end of the session, he issued a last-minute veto.

On February 20 of this year, Abbott and Texas Board of Pardons and Paroles Chair David Gutierrez created a clemency process for survivors of sex trafficking and domestic violence, unveiling it just in time for Super Tuesday.
Please forgive me if I’m skeptical that this will go anywhere, given the governor’s past record.

Legislators and victim advocates have known since the 1980s that Texas police were wrongfully arresting abused women. Abbott claims he supports public safety, but clemency for battered women is a political football he’s spiked or punted at his whim. Meanwhile, incarceration rates of women nationwide have increased 700% over the past 20 years.

The clemency process Abbott introduced in February is the first effort in Texas to free trafficking survivors, and it’s long overdue.

“They shouldn’t be criminalizing people for their own victimization in the first place,” Allison Franklin, a program director for trafficking survivors at SAFE Alliance. “But it’s a step that they’re viewing individuals as victims, not criminals.”

Abbott’s equivocation is unconscionable, as some survivors recommended for clemency in the 1990s are now elderly or terminally ill, costing taxpayers money and the state moral high ground.

The Legislature unanimously passed HB 3078, which would have created a clemency review board comprised of stakeholders such as formerly incarcerated survivors themselves. After the governor’s veto, the parole board issued denials to Sherry Nance, Carla Gautney and Cynthia Campbell Ray, all survivors of domestic violence. The Texas Council on Family Violence, or TCFV, recommended these women for clemency more than two decades ago.
At present, the governor in Texas can only issue a pardon upon the written recommendation of a majority of the Board of Pardons and Paroles.

TCFV recommended 102 survivors for clemency, mostly women, after the 1991 Legislature unanimously passed a resolution lauded as the first effort in the United States promoting clemency for battered women who defended themselves or their children.

However, to date, Texas’ Board of Pardons has recommended only one of those survivors for a full pardon: Becky Wardlow, who killed her batterer in self-defense. Neither Democratic Gov. Ann Richards nor Republican Gov. George Bush signed that pardon. The board later paroled Wardlow, which freed her but left her conviction intact.

I served more than nine years in the Texas criminal justice system. After being arrested for defending myself against an abusive ex-boyfriend, I was coerced into a plea bargain.

While in prison, I began collecting case data that shows criminalized battered women defended themselves or a child 48% of the time. In 33% of the cases, women were dragged in under the “law of parties” when their male batterer killed a child or another person.

“Texas is committed to empowering the survivors of domestic abuse and human trafficking and developing a stronger justice system,” Abbott said when he posted the new clemency guidelines in February.

Yet, on March 30, as part of the state’s COVID-19 response, he issued an order barring releases from county or municipal jails of those charged with, convicted of, or having a history of offenses involving physical violence or threats of physical violence. On its face, this doesn't apply to those in the prisons. However, it means survivors in the justice system have a slim chance their applications will be passed from the Board of Pardons to the governor.

The effort to win clemency for abused women takes place within a national effort for dignity for criminalized women. The National Council for Incarcerated and Formerly Incarcerated Women and Girls began a clemency campaign in 2019 to free “#SurvivedAndPunished” women, along with women who are elderly, terminally ill and long-timers with sentences in excess of 10 years.

We all pay into a prison-industrial complex that is punishing survivors. Please write and call Gov. Abbott and Board of Pardons and Paroles Chairman Gutierrez to get these women home.