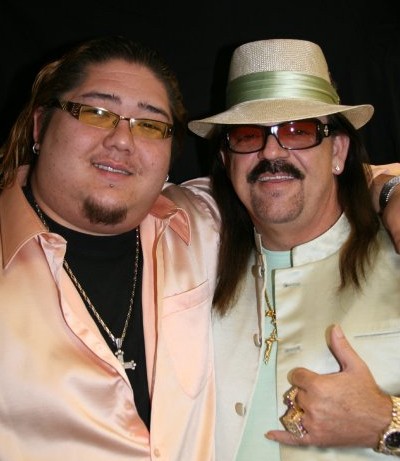 Well, somebody had to draw the parallel. Our only regret is we didn't get there first.

On Monday, MySA.com pointed out an on-target Facebook post labeling the late Mike Yuchnitz — perhaps the most flamboyant TV pitchman to ever work in our city — as "San Antonio's very own Joe Exotic."

Anyone not living in a pop-culture vacuum knows Joe Exotic is the showy handle of Joe Maldonado-Passage, the big cat hoarder at the center of Netflix's docuseries Tiger King: Murder, Mayhem and Madness. However, those who recently landed in the Alamo City may have missed Yuchnitz's similarly colorful saga.

During the 2000s, Yuchnitz became a local demi-celebrity for the low-budget but imminently memorable TV spots he did for his four-store My Econo $39.95 Optical chain.

The Air Force retiree wore garish duds including Asian silk suits, fedoras and glittering pinky rings as he talked up his eyewear shops and a tattoo studio run by his son Noah. Sometimes, the businessman didn't even mention the eyewear or the tats, instead urging viewers to put their kids in car seats of stay clear of gangs.


Beyond Exotic's and Yuchnitz's shared visual similarities — namely, their mullets and over-the-top fashion sense — both were arrested for alleged murder-for-hire schemes.

The Netflix series chronicles Exotic's arrest on charges that he tried to hire someone to snuff out Carole Baskin, the operator of a big cat rescue with whom he carried on a longtime public feud.

For his part, Yuchnitz was busted in 2010 for allegedly trying to hire a hitman to shoot his wife of 32 years, Tina Yuchnitz. According to arrest records, the optician told the would-be gunman where to find his wife and instructed him to make it look like a robbery.

A divorce played out, providing plenty of juicy details, and family was forced to carve up its business empire. However, Yuchnitz never faced trial in the alleged murder scheme.

In September 2013, the businessman's body was discovered near the extended-stay hotel where he'd been living. According to Bexar medical records, he died of heart problems related to lung cancer.

Tina Yuchnitz continues to run the My Econo chain. And, inexplicably, only one of Yuchnitz's commercials remains available on YouTube.

If only a documentarian had been chronicling the rise of his eyewear empire.