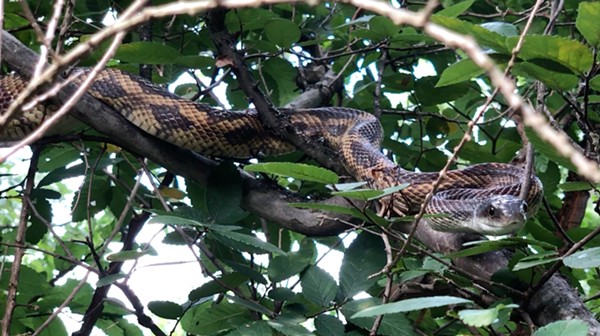 Texans are supposed to be pretty neighborly, but that doesn't seem to apply to the wildlife that we share space with. While we're generally keen to keep up with local chisme, it seems that locals are pretty clueless when it comes to our non-human neighbors.

Case in point: on the heels of San Antonio's misplaced "murder hornet" panic, online news site MySA published an article Wednesday declaring that a local man had found what he described as a "huge" snake hanging from the doorknob of his home.

With a species size range of three to five feet, a four-foot Texas rat snake seems to be not "huge" but "regular degular."

"The snakes, which can grow up to six feet, are typically found around human habitation, as the reptiles like to eat birds, chicken eggs and other mammals," MySA's report reads.

Ignoring that quote's implication that birds and chicken eggs are classified as mammals, we're surprised that the site deemed rodentia not worth mentioning — it is the Texas rat snake, after all.

While we admit that it would likely be a shock to find a snake knocking at the door, the nonvenomous species is a widespread Texas resident that can be found throughout San Antonio, and makes for a better neighbor than some of our fellow Homo sapiens.

"They are extremely beneficial to our ecosystem," Crump told MySA, "and if you leave them alone, they will leave you alone."