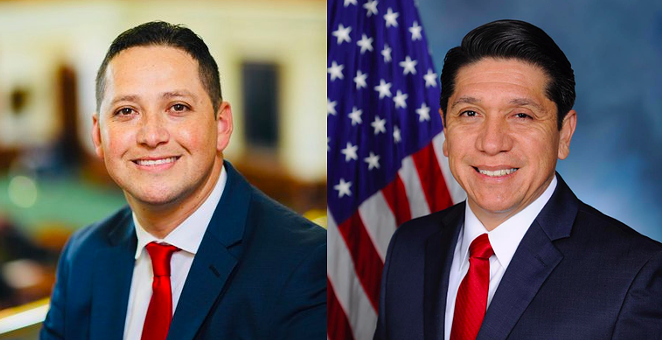 On Monday, President Donald Trump’s campaign fired off a cease-and-desist letter to candidate Raul Reyes demanding that he stop implying in campaign materials that he'd landed a White House endorsement, Politico reports. The letter accuses Reyes of misappropriating Trump’s "name, image, and likeness to misleadingly suggest that the President endorses [his] candidacy.”

Although both Republicans locked in the July 14 runoff have gone to great lengths to spell out their allegiance to Trump, the president has only endorsed Reyes' opponent, Tony Gonzales.

The race will pit the winner against Gina Ortiz Jones, a Democratic challenger who came within 1,000 votes of ousting Republican Hurd during the 2018 election cycle. The swing district, which includes part of San Antonio and a long swath of the Texas-Mexico border, went to Hilary Clinton in 2016.

The Republican runoff got a jolt of national exposure two weeks ago, when Sen. Ted Cruz of Texas endorsed Reyes, a former Air Force officer, putting Cruz on the opposite side of Trump and much of the GOP establishment.

On Monday, Trump made a typically hyperbolic endorsement of Gonzales during a tele-town hall for the candidate, according to the Texas Tribune.

While Politico points out that the Trump campaign's cease-and-desist letter comes too late in the runoff to have much effect, it's just the latest dose of drama in a race that's generated a surprising amount.

Gonzales, a Navy veteran, has run recent TV spots accusing Reyes of being fired from his job at a junior college for ethical lapses.For his part, Reyes recently accused Gonzales of embracing the progressive League of United Latin American Citizens (LULAC) and "their open borders agenda."

Tensions between the two contenders already appeared to be high last fall when Gonzales' mother filed a report with the San Antonio Police Department accusing a Reyes campaign associate of spying on her son.