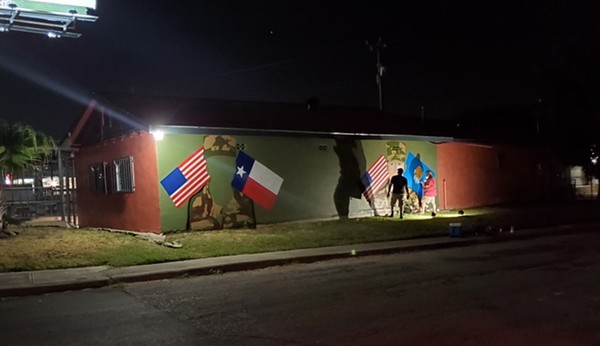 Both soldiers disappeared from US Army base Fort Hood, only to be discovered dead months later.

The mural is sponsored by local nonprofit Circle of Arms and will adorn the side of Sanchez Ice House #2 near the Walters gate of Fort Sam Houston.

Circle of Arms is a San Antonio nonprofit that advocates for mental health awareness through education, focusing on a wide demographic that includes women, veterans, senior citizens and children.

“Their granddaughter is active duty Navy,” Circle of Arms founder Larissa Martinez said of the Sanchez family. “They felt a connection specifically to Vanessa because she could have been their granddaughter.”

Ghost is an Army veteran from San Antonio who was stationed at Fort Hood during his military career. Martinez told the Current that she posted a call for artists for this project, and Ghost responded, saying he felt connected with both Guillen and Morales due to his military history.

The Sanchez family has been unable to open their icehouses during the COVID-19 pandemic. However, the shops will be open to sell food and drinks during the unveiling of the mural.

Those who would like to attend the unveiling are encouraged to bring flowers and other tributes for Guillen and Morales. The event will take place Sunday, July 19, from noon-2 p.m. Sanchez Ice House #2 is located at 701 Seguin Street on San Antonio’s East Side.