Report: There's So Much Poop Along the Texas Coast, Swimming Could Make You Sick 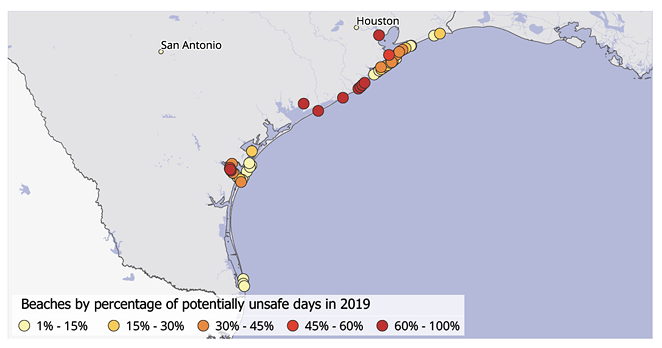 Texas beaches may be open during the pandemic, but that doesn't mean they're safe places to swim, according to a new study of levels of fecal bacteria along the Gulf Coast. And by "fecal," yes, we mean shit, or poo — or whatever brown-tinged euphemism you prefer to use.

For the report, Environment Texas Research and Policy Center analyzed which beaches had fecal indicator bacteria levels last year that could result in illnesses for an estimated 32 out of every 1,000 swimmers.

Indeed, scientists estimate that people are sickened around 57 million times annually from contact with polluted U.S. waters. Fecal bacteria can result in gastrointestinal problems and a variety of other health issues.

Fecal bacteria is commonly found in stormwater runoff and sewage overflows. To remedy the problem, Environment Texas recommends that the state repair its aging sewage systems, enact moratoriums on new industrial-scale livestock operations and protect wetlands, which filter out bacteria and pollutants.