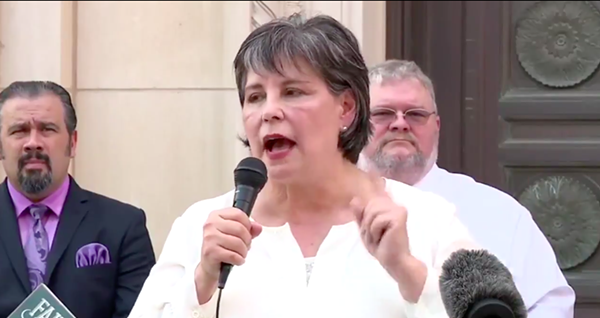 Say what you will about Bexar County GOP Chair Cynthia Brehm, but she's certainly made election season entertaining.

In a news release supplied to KSAT, the controversial chair accused the Bexar County Elections Department of mishandling voting data. In the statement, she charged that officials failed to provide chain-of-custody documents for multiple voting centers, accessed early voting data prior to the official count and failed to post a guard for early vote data.

“In summary, I Cynthia Brehm, have determined that every aspect of this election has been severely compromised,” she said in the release reported by KSAT. “Therefore, I cannot in good conscious [sic] certify the results of this election.”

Of course, this isn't the first time Brehm has accused Bexar elections officials of mucking up a local contest.

Last summer, she made headlines by alleging without substantial evidence that county elections officials had tampered with ballots. Later in the year, she threatening to force the county to oversee a separate GOP primary.

Brehm's tenure as Republican chair has been mired in controversy, some revolving around her failure to disclose during the 2018 election campaign that her husband once pleaded guilty to exposing himself to Brehm’s daughter when she was a minor.

Last month, GOP leaders including Texas Gov. Greg Abbott called on Brehm to step down after she posted on social media that the killing of George Floyd by Minneapolis cops may have been a “staged event” intended to drive Black voters away from supporting President Donald Trump.