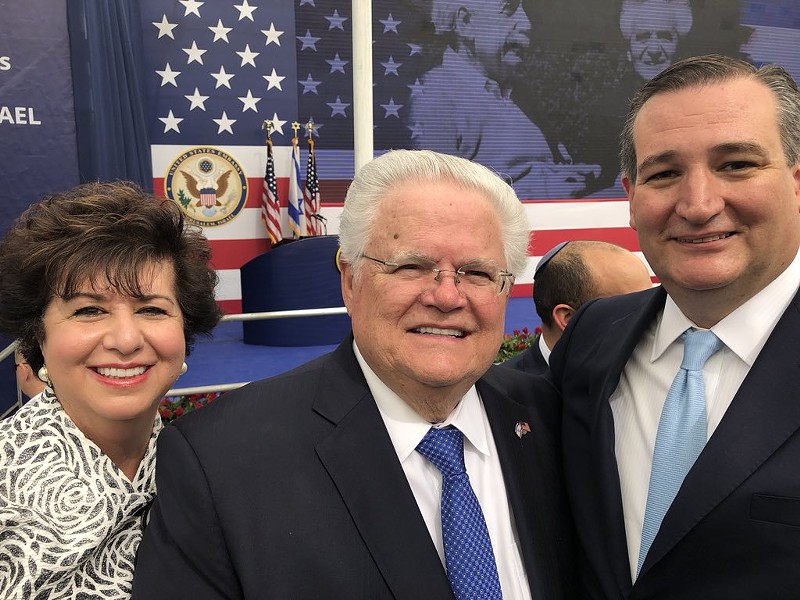 Pastor John Hagee of Cornerstone Church may not like the government telling him when he can reopen his 1,300-pupil private school or giving handouts to his flock.

But, apparently, he doesn't mind asking Uncle Sam for cash to keep his political objectives in play.

In April, Hagee's CUFI Church Association, the nonprofit arm of his powerful pro-Israel lobbying apparatus, received a loan valued at $350,000-1 million through the federal Paycheck Protection Program, according to a Washington Post analysis of U.S. Small Business Administration records.

CUFI Church Association, listed in SBA records as a religious organization, said it would use the money to protect 51 jobs. The PPP program, approved by Congress during the pandemic, was largely intended to help small businesses avoid layoffs.

Hagee's group sought the funds despite the televangelist's long record of preaching that God-fearing Christians need to provide for themselves, not seek government assistance.

During a sermon last year, for example, Hagee's son Matt told the Cornerstone crowd that student loan forgiveness and government-provided healthcare both qualify as "socialism" and violations of God’s will.

Last week, the pastor sued local officials over a public health order delaying the start of the school year due to the pandemic. In the court filing, Hagee's lawyers argue that governments violate the U.S. Constitution when they tell religious campuses such as Cornerstone Church Schools when to open.

During the 2019 citywide elections, Hagee publicly called on his followers to vote against Mayor Ron Nirenberg over council's decision not to allow fast-food chain Chick-fil-A to open an outlet in the San Antonio airport.

Hagee enjoys strong support in U.S. conservative circles, and his CUFI bills itself as the largest pro-Israel organization in the United States, claiming more than 8 million members.

Through the second quarter of this year, the group's political arm — organized separately from CUFI Church Association — spent $114,000 lobbying elected officials, according to the nonprofit Center for Responsive politics. That compares to a total of $180,000 in 2019 lobbying expenditures.

Hagee teaches a controversial theology that argues the continued construction of Jewish settlements, including on land claimed by Palestinians, is necessary to bring Christ's second coming. As a result, CUFI's lobbying work has drawn criticism from groups advocating for Middle East peace.

"The ideology of Christian Zionism, which CUFI promulgates, envisions Muslims as enemies of God," said Johnathan Brenneman, spokesman for Friends of Sabeel North America, a Christian ecumenical organization advocating for peace and justice in the Holy Land. "Christian Zionist leaders like John Hagee are some of the worst perpetrators of anti-Muslim bigotry in the world. CUFI spreads hateful stereotypes and misrepresentations of Muslims and Arabs (the organization rarely differentiates between the two), including Muslim and Arab Americans."

John Burnam, a principal at Burnam|Gray, a San Antonio-based group that consults on nonprofit issues, said numerous local charities have accessed PPP funds to keep employees on during the pandemic. However, CUFI's appears to dwarf most obtained by Alamo City nonprofits.

According to Burnam some of the nation's best-funded charities have opted to sit out the PPP program so the money remains available for smaller nonprofits. Without access to CUFI Church Association's financial filings, he added, it's difficult to tell whether the group crossed ethical lines by obtaining a loan of up to $1 million.

"The general consensus in the nonprofit space has been if you didn't need the money, it's best to leave it to someone else," Burnam said.