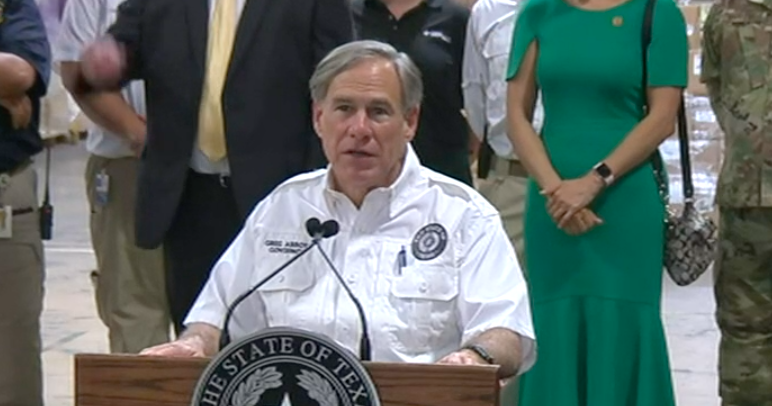 However, many of his prepared remarks — not to mention most questions posed by reporters — focused on the contentious debate on how to reopen schools as COVID-19 infections and deaths remain high across the state.

At the Texas Division of Emergency Management's central warehouse, Abbott talked up the state's distribution of PPE, pointing out that the agency has so far distributed more than 59 million masks and 568,000 gallons of hand sanitizer to schools in preparation for their reopening. He also outlined efforts to ensure the upcoming flu season doesn't cut into supplies.

But a substantial portion of Abbott's remarks were devoted to defending his guidance that school districts, not orders by local health officials, should determine when and how schools restart. That guidance appears to stand in the way of a recent order from San Antonio Metro Health that schools must remain virtual until Sept. 7.

"The people who know best about that are local school districts," the Republican governor said, adding that board members and superintendents are still able to weigh the advice of public health experts.

"Nothing is stopping them from doing that, and they can fully adopt whatever strategy the local public health authority says," he added.

One reporter asked Abbott why people should listen to him over the recommendation of medical doctors. Abbott replied that local districts, not him, had the power to make decisions.

The governor's remarks come as the state's educators and parents voice frustration over conflicting guidance over which authorities have the final call to set the schedule for reopening schools.

Abbott's appearance also marked his first press conference in months as the state struggles contain alarming infection rates. Instead, the governor has focused on brief appearances on local TV stations to provide updates on the health crisis.

A recent poll shows that nearly two-thirds of Texans disapprove of Abbott's performance during the pandemic. His approval numbers in that ongoing poll have dwindled each month since April.

In statement, the Texas Democratic Party characterized Abbott's San Antonio presser as a photo op and a distraction.

"Just like Donald Trump, Governor Abbott has proven time and time again that he has failed Texans in our greatest time of need," said Abhi Rahman, the party's communication director. "After refusing to hold a press conference for three months while the situation severely worsened, Abbott finally held a staged photo-op in front of crucial PPE where he didn’t directly answer questions and refused to take responsibility for his failures managing the coronavirus crisis."