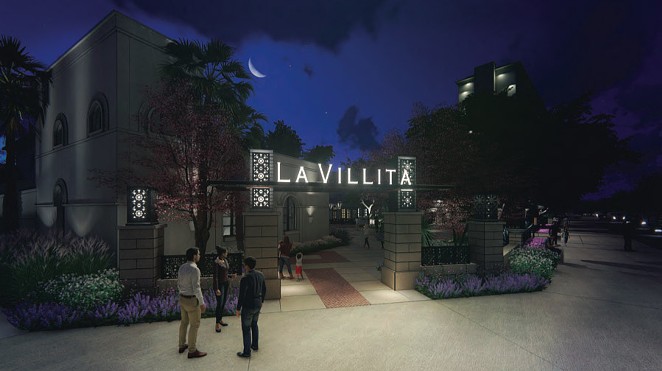 The reduction of public space in the $12 million Maverick Plaza renovation plan at La Villita drew sharp criticism from the Conservation Society of San Antonio during the Historic and Design Review Commission meeting on Wednesday.

For more than 70 years during Fiesta, the group has held A Night in Old San Antonio (NIOSA) at La Villita, its largest fundraiser of the year. The Conservation Society is concerned the scaling back of plaza space will hamper its ability to make maximum dollar during NIOSA. Every year, ticket sales are partly funneled back into La Villita’s restoration, but also fund the society’s year-round efforts to preserve San Antonio’s historic structures and spaces.

More than 50 people expressed dismay over the new Maverick Plaza design, which will reduce the public space by 35% — from 27,300 square feet to 17,750 square feet. Three new restaurants with patio seating, a development headed by local chef Johnny Hernandez, will consume the plaza’s periphery space against the walls that currently enclose it. Those limestone walls, erected in the 1970s, will be razed to open up the plaza.

The architecture team of Fisher Heck and MP Studio told the commission the promenade along South Alamo Street will expand by 8.5% and will blend into the plaza after the walls are removed.

“We aren’t against change,” said Patti Zaiontz, Conservation Society president. “Preservation is about managing change and too often we aren’t included in managing that change, and this is a biggie for us.”

In a 4-3 vote, the HDRC narrowly approved the public space aspect of the design; the restaurant design will be brought to the commission at a later date. 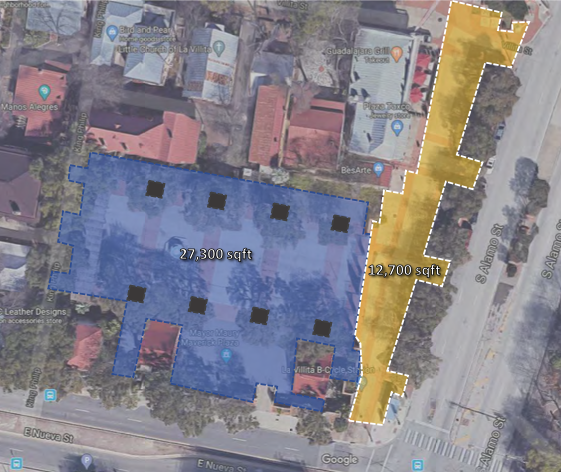 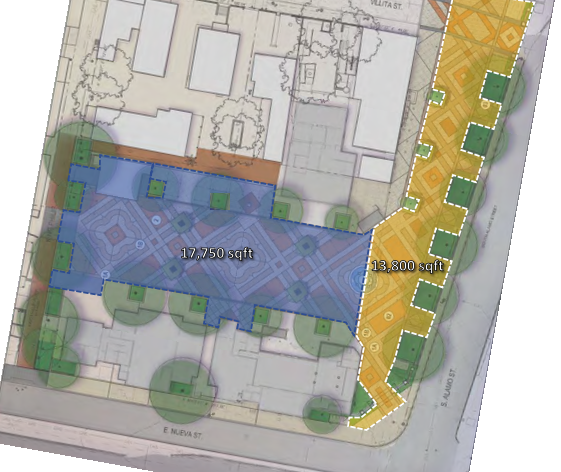 In May 2018, Hernandez’s Grupo La Gloria began a 49-year lease of the plaza with the city. Hernandez’s group was selected and approved by the City Council in 2017 through an open bidding process. In 2018, Hernandez selected Fisher Heck and MP Studio to design the plaza’s renovation, and stakeholder engagement began.

“Our task was to activate Maverick Plaza and energize it on a daily basis, and not just for large events, but for everyday users—people who live downtown, work downtown,” Mark Padilla, lead principle of MP Studio, told the commission.

Construction is scheduled to begin in November and take a year to complete, city officials said. Hernandez’s company is footing most of the $12 million bill—$7.6 million, while the city contributes $4.4 million from the Inner City Tax Increment Reinvestment Zone. Grupo La Gloria’s rent starts at $100,000, which will fund the plaza’s maintenance and programming.

Throughout the process, the Conservation Society has felt consternation about how the plaza renovation will impact NIOSA, in particular Frontier Town, it’s biggest money-maker among the festival’s other sections. The idea of moving NIOSA to Hemisfair’s Civic Park, whenever the delayed project is completed, has been floated as well, Zaiontz said.

“‘Well you can move to Civic Park when Civic Park is built.’ No. Our home is at La Vilita and that’s where we want to stay,” Zaiontz said.

The city says the Conservation Society has been kept abreast of the renovation’s impact on NIOSA.

“The city has made multiple commitments that NIOSA will continue and we will work with them in the future,” Rhea Roberts, special projects manager with the city, told the commission.

An in email to the Heron, Paul Berry, chief communications officer for the Department of Public Works, added, the society has “also had members participate in our Maverick Park Public Design meetings. We understand their concerns and we have addressed them multiple times.”

But the Conservation Society contends the city has done the bare minimum in including the group in the redesign process.

“We were not as involved in the planning as they would think we were,” Zaiontz said. “They’ve checked the box as far as saying, ‘OK, we’re going to do this here. Are you OK with that?’ ”

The Conservation Society also fears the plaza will become privatized because Hernandez’ company is leasing the public space. Zaiontz doubts there will be enough space to hold cultural festivals and family-oriented gatherings such as weddings and quinceaneras once the project is completed.

The lease between the city and Grupo La Gloria, which can be downloaded here, does not detail how programming will work. In late 2018, when the Heron first reported this story, the city’s Center City Development and Operations Department said an operational and programming agreement, which out outline such matters, was not written or negotiated.

“Maverick Plaza will always remain open to the public,” Roberts told the commission. “That was never a question. We do anticipate it will be programmed on a daily and weekly basis with different forms of activity to be coordinated with chef Johnny Hernandez, Grupo La Gloria, as well as other stakeholders and La Villita.”

But what that programming will look like—whether the current series of festivals and events will be allowed to continue at Maverick Plaza, or have the room to—has not been made public. What’s also hazy event revenue split between Hernandez and the city when the programming resumes after completion and post pandemic.

Under the lease, Hernandez is allowed to close the plaza and Arneson River Theatre eight days of the year for private events. Otherwise, the lease appears to provide Grupo La Gloria with full control of the plaza’s programming.

“Tenant hereby covenants and agrees to engage in regular public programming of Maverick Plaza including the newly constructed educational kitchens,” the lease reads.

Before the pandemic, Hernandez held his first event at La Villita, the new Day of the Dead San Antonio series, which had the financial backing of the city—to the anger of cultural groups who had grown their Dia de los Muertos celebrations from the community level for many years.

The city, Hernandez and an executive with Fisher Heck did not grant interview requests for this article.

The plan would transform Maverick Plaza into a culinary destination.

Hernandez will build a Mexican restaurant along East Nueva, as well as a German restaurant and brewery to be managed by Cured owner Steve McHugh, and a Spanish restaurant in the circa-1855 Faville House by Elizabeth Johnson of Pharm Table.

One of the concerns from the Conservation Society and some of the La Villita shop owners is that the project is designed to draw pedestrians toward the restaurants, not the rest of La Villita. They call for more signage on Villita Street and for ornate pavers to extend up Alamo Street to the River Walk entrance near the Hilton Palacio del Rio.

Commissioner Jeffrey Fetzer asked about the plaza’s fountain. The plan shows the current fountain demolished and replaced by one situated closer to South Alamo. Padilla told the commission the water portion of the new fountain would be larger than the existing one, but that the current fountain has a larger stepped base that has been used as a place for people to congregate.

“What I see is a design that only takes into consideration a creation of a place, but in no way shape or form do I see it respecting a place with dramatic history,” Velasquez said.

“We heard so much response from the public about, ‘My grandfather, my dad … they used to have a shop out here’,” Navarro said. “‘They were artisans. They used to do metal work. When I was a kid, I used to come out here and play with this art shop, this pottery place.’

“That really stuck with us. … You can see that in the metal work as well as in the light work, showing how that could be something that was handcrafted very delicately.”