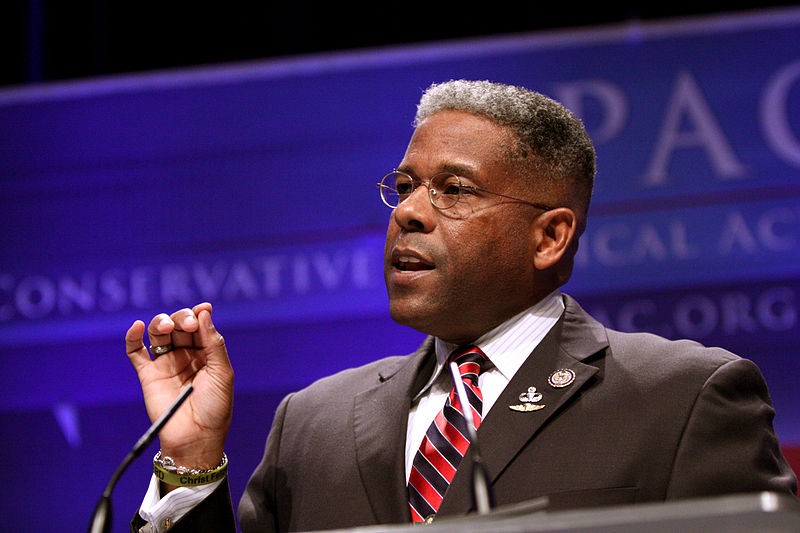 Shortly after Allen West took over as the Texas GOP chair last month, he gave the party a new slogan — "We are the storm" — and plastered it everywhere: fundraising emails, social media accounts, even on T-shirts and hats for sale.

West, a former Florida congressman, indicated he drew inspiration for the slogan from an unattributed quote that he likes: "The devil whispers to the warrior slyly can it withstand the coming storm. The warrior responds, 'I am the storm.'" Others, however, saw something more nefarious: a dog whistle to the QAnon conspiracy movement — the one that President Donald Trump notably declined to denounce Wednesday, saying he did not know much about it while also speaking favorably of its followers.

So what's going on at the state party?

On Thursday, The New York Times published a story that prominently featured the Texas GOP slogan, calling it an "unusually visible example of the Republican Party’s dalliance with QAnon." The party pushed back on the story — pointing to the anonymous quote as the "provenance" of the slogan — and said it was never contacted for comment. Democrats, meanwhile, called on state GOP leaders to disavow the slogan, which West indicated he would not do.

The QAnon movement adheres to an unfounded theory that a mysterious government official named "Q" is exposing a plot against Trump by "deep-state" actors involving satanism and child sex trafficking. Some believers have been accused of plotting or carrying out violent crimes, including killing a New York mob boss. In April, an Illinois woman was arrested after she traveled to New York with illegal knives and wrote on Facebook that Hillary Clinton and Joe Biden need to be "taken out."

Last year, the FBI identified the movement as a domestic terrorism threat. It is getting more attention than ever after Marjorie Taylor Greene, a GOP congressional candidate who openly supports the movement, won her primary runoff last week in Georgia — and after Trump's comments Wednesday.

The concept of "the storm" is a significant part of QAnon vernacular, said Mark Fenster, a law professor at the University of Florida who studies conspiracy theories.

“The storm has been one of the metaphors that Q and his followers have used to describe the coming upheaval in which Donald Trump reveals himself to have been working heroically behind the scenes to expose and punish those who have been engaged in this horrible satanic child sex cult," Fenster said. "Storms are longstanding metaphors going back to biblical [times] of how it is you cleanse what has otherwise been a sinful humanity."

While it may not be entirely clear how the Texas GOP slogan plays into that metaphor, Fenster noted that QAnon followers are constantly trying to "seek out the breadcrumbs" in statements by public figures to discern solidarity with them.

"They view it as just part of the game," Fenster said. "The classic QAnon move ... is to take isolated anomalous sentences of Trump’s Twitter feed or press conferences and say, 'See, this demonstrates that this is gonna come true.'"

Before the uproar over the New York Times story, West was asked about the slogan's nexus to QAnon during an interview earlier this month with KXAN-TV in Austin and denied a connection. West pointed to the quote beginning with "the devil whispers" and said, "I don’t know about anybody else and I’m not into internet conspiracy theories."

While the quote's origin is unknown, West has used it previously, including in speeches while campaigning for state party chair. In one speech uploaded to YouTube on July 11, West calls it "one of my favorite quotes," recites it in full and says the "Republican Party of Texas — and each and every one of you — we're gonna be the storm that the progressive socialist left has never seen."

On Friday, the Texas GOP blasted the New York Times story, saying the newspaper never "reached out for a comment or clarification."

"The we are the storm poem is one of Chairman West’s favorite quotes to use in speeches," the statement said. "He and the entire Texas GOP will not be bullied by partisan leftists in the media into ceding powerful phrases with biblical roots — taken from Psalm 29 — to Internet conspiracy groups. The New York Times should be ashamed of themselves, and we look forward to their correction, apology, and retraction."

On Friday evening, a New York Times spokesperson, Ari Isaacman Bevacqua, said the newspaper "reached out to the Republican Party of Texas and did not hear back" before publishing the story. The party's spokesperson, Luke Twombly, said he received no such correspondence. The story did not include any mention of an effort to reach the party.

Psalm 29 does not include the "devil whispers" quote. However, it is titled "The Voice of God in a Great Storm" and depicts God as a force for good overwhelming nature.

The Texas Democratic Party did not buy the GOP's explanation for the slogan.

"The Republican Party is being led by an internet cult that believes in dangerous, extreme far-right conspiracy theories," party spokesperson Abhi Rahman said in a statement. "West can try to deny it’s connection, but it’s there in plain sight for everybody to see."

The party particularly pressured U.S. Sen. John Cornyn, who is up for reelection in November, to denounce QAnon.

Whatever the state party's explanation, the slogan has created unease among some Texas Republicans. Among them is Chris Ford, former chair of the Dallas Young Republicans.

"I truly believe it’s not the intention of Chairman West to spread this QAnon message, but if someone like me, after a little research, can find there’s a bunch of QAnon accounts on Twitter saying, 'We are the storm,' and a T-shirt you can buy with 'We are the storm' and the letter Q, I think the Texas GOP should’ve done the research and said, 'Do we even want to even appear that we’re pandering to this conspiracy theory part of the GOP?'" Ford said.

Ford added that he would like to see a "firm denouncement" from the state party, but he acknowledged it is "hard when you have President Trump not denouncing the movement."

West has been Texas GOP chairman for about a month, after a resounding defeat of incumbent James Dickey at the party's convention in mid-July. West has so far made good on his campaign promises to orient the party to more aggressively confront Democrats, challenging his Democratic counterpart to a debate shortly after taking over and holding a rally Thursday with the McCloskeys, the St. Louis couple who brandished guns at Black Lives Matter protesters outside their home in June.

Disclosure: Facebook and The New York Times have been financial supporters of The Texas Tribune, a nonprofit, nonpartisan news organization that is funded in part by donations from members, foundations and corporate sponsors. Financial supporters play no role in the Tribune's journalism. Find a complete list of them here.