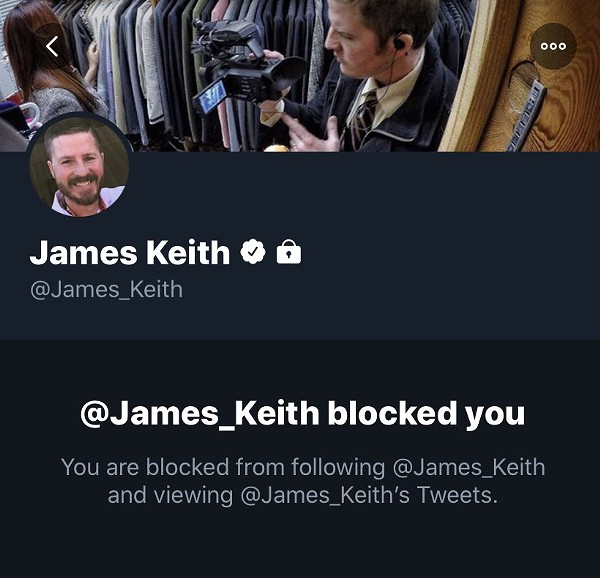 KENS5 Assistant News Director James Keith went on a Twitter blocking spree this weekend after criticism from local reporters and former San Antonio mayor Julián Castro over how the station handled issues of race in a recent story.

Things kicked off on Friday when Keith tweeted about a KENS5 story on a local man's arrest when police mistook him for a family violence suspect. The concern? Pertinent information was missing from the headline — namely, that the man is Black.

The KENS5 headline reads, "Police admit they arrested the wrong man, yet he still sits in jail."

Compare this to the Express-News' headline: "San Antonio police wrestled a Black man into a squad car and took him to jail. He wasn’t the suspect they were searching for."

Or the Current's coverage of the incident:"San Antonio Mayor Demands Answers After Police Force Black Jogger Into Back of a Patrol Car."

Several journalists, including the Express News' Lauren Caruba and The Oaklandside's Ashley McBride, a former Express News reporter, criticized KENS5's handling of the story, noting that the omission of race in the headline during a national reckoning with systemic racism and policing was a journalistic oversight.

You are failing your audiences if you, a journalist, think race is only worth mentioning in police encounters if you can "prove" that's what motivated them.

"When would police ever say that race is the reason they're arresting someone? This is an extremely naive and problematic take, especially coming from someone who makes decisions about what stories to cover and what angle to cover them from," McBride, a Black woman, posted in response to a now-deleted tweet from Keith.

"You are failing your audiences if you, a journalist, think race is only worth mentioning in police encounters if you can 'prove' that's what motivated them," she continued in a second tweet.

Castro, a 2020 Democratic presidential candidate, entered the fray on the same thread, pointing out that prior to working at KENS5, Keith was a spokesman for the Bexar County Sheriff's Office.

According to @ExpressNews witness account, “She said Ometu’s only crime was ‘jogging while Black.’”

Also, respectfully, prior to your role at KENS you worked as the PR spokesman for the Bexar County Sheriff’s Office—very pro-law enforcement.

"According to @ExpressNews witness account, 'She said Ometu’s only crime was ‘jogging while Black,'" Castro's tweet reads.

"Also, respectfully, prior to your role at KENS you worked as the PR spokesman for the Bexar County Sheriff’s Office — very pro-law enforcement," he continued.

"There’s a dozen responses I almost typed but at the end of the day I’d be arguing with someone who was a mouthpiece for law enforcement and, quite frankly, might still be," Express-News reporter Krista M Torralva tweeted in response to the incident. "He’s telling reporters how to be journalists, knowing journalists should be free of bias. Not worth my time."

"No newsroom I’ve ever worked in would allow a former sheriff’s office spokesman anywhere near crime and policing coverage, and his deference to the police department’s word over everything explains why," McBride added in another tweet.

Keith's response to the criticism was to double down in a now-deleted series of tweets — then block his apparent detractors, Caruba told her followers.

Yesterday, the assistant news director at @KENS5 in San Antonio got into it with several journalists on Twitter over a problematic headline: https://t.co/h4yo0oUflI

He has since blocked those journalists and protected his tweets. Oh, and Julián Castro called him out. pic.twitter.com/rdoItL6GOs

"Putting blinders on and willfully misunderstanding the racial dynamics of a story you’re reporting on isn’t something to be proud of. ... Several reporters, including a Black woman, have tried to explain to [Keith] why this rationale is wrong," Caruba tweeted in a thread summarizing the incident, which included several links to Keith's now-deleted tweets.

"His response has been to double down and be incredibly condescending." she continued.

Soon after, Caruba tweeted a screenshot showing that Keith had blocked her on Twitter — and she's not the only one.

"@James_Keith then blocked @JulianCastro after he respectfully pointed out that James worked for the Bexar Cty Sheriffs Office and that a witness said race played a role in the wrongful arrest," Hackett posted. "Not sure this guy should be making news coverage decisions."

.@James_Keith then blocked @JulianCastro after he respectfully pointed out that James worked for the Bexar Cty Sheriffs Office and that a witness said race played a role in the wrongful arrest.

Not sure this guy should be making news coverage decisions. @KENS5 @ExpressNews https://t.co/CxJfcVejgm pic.twitter.com/qytHGduIMS

So far, it appears that the Current's staff has avoided Keith's blocking spree, but his account is now set to private.