Analysis: College Football is Back — as Both a Spectacular and a Science Experiment 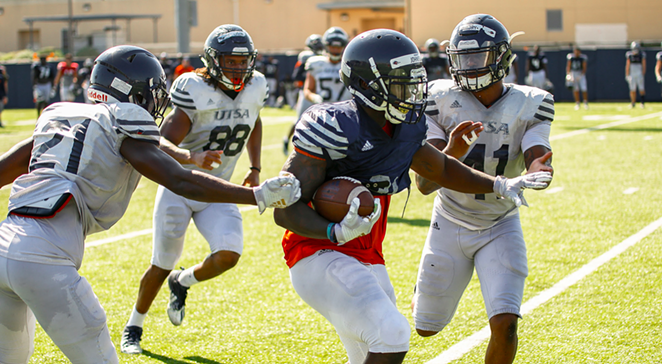 Texas’ college football players won’t be the only people with butterflies in their stomachs this weekend.

They’re just the most public players in the state’s reopenings of educational institutions, a fraught statewide foray into in-person education, live arena events, and the kinds of young adult interactions that have made coronavirus hot spots of campuses and college towns across the country.

Texas Christian University and Southern Methodist University were supposed to play Friday but canceled when some TCU players and staff tested positive for COVID-19. SMU played last Saturday against Texas State University, but the TCU-SMU game would have been the first involving a Big 12 school. This weekend, two Texas schools in that conference will take the field: the University of Texas at Austin and Texas Tech University. A third was supposed to play, but Baylor University postponed its weekend game after several Louisiana Tech players tested positive. Texas State will play again, this time against UT-San Antonio.

Returning to school is a test for the students, the schools and the state. Returning to football, with its wider audience and high visibility, raises the stakes.

Lots of places aren’t so lucky. The New York Times surveyed 203 counties where students make up at least 10% of the population — college towns, basically. Half of those had their worst pandemic weeks after Aug. 1.

Many schools have COVID-19 dashboards to keep everybody up to date. Here’s one at UT-Austin, where cases have jumped in the last couple of weeks. Another, at Texas A&M University, tells a similar story — that cases rise when school starts and the population swells.

Increases in coronavirus cases were expected. The question — and it’s still unanswered at this point — is whether it’s wise, on balance, to reopen in the way Texas colleges have reopened.

In the meantime, the most visible results tend to be the negative ones. And the blame tends to be aimed at students — especially when they’re off campus — and not at the administrators and others running the schools. If you put a bunch of young people together, away from home, with plenty of free time, you don’t get something you’ve never seen before — you get what you’d expect.

But the students are the reopening vanguard for the rest of us.

Some schools planned for this better than others. Some were ready to handle coronavirus outbreaks, and others are learning. For instance, schools that had been sending sick students home are now keeping them on campus, in quarantine, where they don’t take a contagious disease back to their families and their hometowns.

Students, like everyone else, are looking for ways to blow off steam, to enjoy their leisure time. At the moment, they’re shut out of bars, restaurants and other gathering places. Swimming pools and river tubing and similar adventures are off limits. As Karen Brooks Harper reported for the Texas Tribune, the responses vary. Baylor is cracking down to see that students don’t get rambunctious in ways that would spread the virus. Texas A&M has asked the surrounding community to report big off-campus parties and gatherings.

But now college football is back. It’s one of the most visible things colleges do. It’s full of built-in social distancing violations, too, with crowded arenas, tailgate parties, house parties, sports bars and all the rest.

All that is supposed to be on hold this year, or tamped down to a nonthreatening size. The players have their own risks — remember those TCU and Louisiana Tech examples. Students on the whole have had their own risks since they began drifting back to campus for the fall semester.

Now the fans will be tested, and in two ways. They’ll either behave or not; it’s just as easy to spread a virus if everybody gets together in front of a TV set as it would be at a tailgate.

Second is the test that’s of interest to people in college administration, in government and in politics: Whether it’s smart to proceed with a season of college football during this pandemic — and with a semester of students gathering on and around the campuses of the colleges that field the teams.