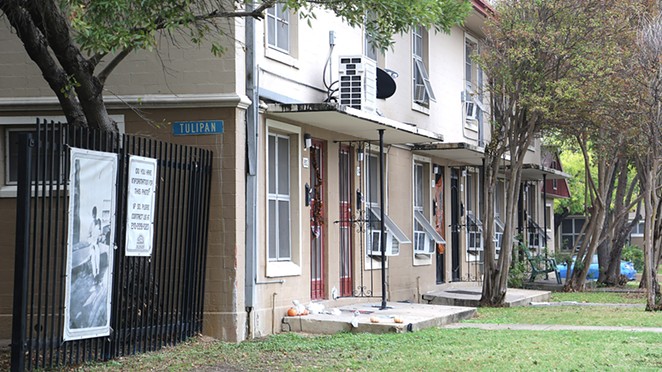 Alazan-Apache Courts, an 80-year-old West Side public housing complex threatened with demolition, has been named to a top preservation group’s list of the most threatened U.S. historic locations.

The Westside Preservation Alliance and Esperanza Peace & Justice Center nominated the complex for the National Trust designation in a bid to preserve it.

Even though the complex, often referred to as Los Courts, still provides housing to 1,700 low-income residents, the San Antonio Housing Authority (SAHA) has targeted the site for demolition to make way for mixed-income housing. It could begin tearing down units as early as 2022.

National Trust officials said Los Courts are a key part of the city's Mexican American history. Established in 1939, the complex provided affordable shelter on the predominantly Latinx West Side, which was plagued by high rates of poverty and a lack of basic municipal services.

In an emailed statement, Katherine Malone-France, the Trust's chief preservation officer, said the complex and other places on its list "tell the full, true history of the United States."

"In a time of challenge in this country, preservation represents a kind of optimistic reinvestment in our nation that can give hope to communities and bring people together," Malone-France said. "Preservation is a way of reaffirming our commitment to each other, because it is a tangible way in which we demonstrate respect for one another’s contributions to our shared heritage."

In an emailed statement, SAHA Communications and Public Affairs Director Michael Reyes said the complex is historically significant. However, he said the residents' perspective "tells a story of life beyond the architecture."

"While the cement cinder blocks from the 1930s were sufficient for the pre-World War II era, they are not fit for modern times and standards," said Reyes, a former resident of Los Courts. "It is not feasible to rehab a distressed community built with cement cinder blocks."

In a survey, four out of five residents said they'd prefer the old units be demolished and replaced with new ones, Reyes added.

SAHA has pledged to set aside affordable units in areas where it razes older public housing to make way for new mixed-income developments.

However, Sanchez said only a fraction of the residents of the East Side's Wheatley Courts ended up moving into the East Meadows development that went up on the site of the former public housing complex. She worries similar displacement is likely at Los Courts as gentrification continues to sweep the West Side.

"They may end up developing nice housing in these gentrifying areas, but it's not for the folks who need it the most," she said.