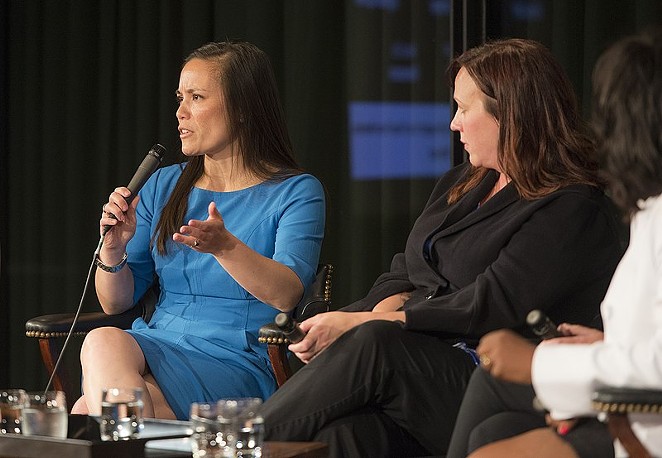 Beto O’Rourke’s run at U.S. Sen. Ted Cruz two years ago doesn’t get the credit it’s due for upending the financial model for a statewide federal race in a big state like Texas.

MJ Hegar’s Senate race this year illustrates the problem challengers face here. The size of the state, and the expense of running in a place this big and with this many expensive television markets, keeps Texas races off the national party and political action committee lists of top targets every election cycle.

It’s an inefficient investment, from a national point of view. Even if you think you can beat an incumbent — U.S. Sen. John Cornyn, for example — it’s cheaper to support challengers in smaller, less expensive states.

From that national perspective, the prize in a Senate race is the same, no matter where you win. So why not invest where it’s cheap, preserving money that might be wasted in a big state for use in smaller states where you can reach a majority of voters for far less?

Much of O’Rourke’s money was non-institutional, raised both in and out of state from small donors reached online. By luck and design, he financed his statewide campaign without having to get the attention of the people in those national political strategy sessions in Washington. They were doing what they generally do, spending most of their money in what were seen as winnable races in states where campaigning is cheaper.

Still, that 2018 race between Cruz and O’Rourke was the most expensive in the country, with just over $125 million spent by the two campaigns, according to the Center for Responsive Politics. Cruz, who spent $45.6 million, defeated O’Rourke, who spent $79.1 million. But the close finish (a 2.6 percentage point gap) at the top of the ticket closed up other races.

Republicans in statewide contests still enjoyed what has become a customary sweep, but their margins were cut and are often used as evidence that Texas might not be as reliably Republican as it was just a few years ago. The Democrats won two congressional seats held by Republicans, and picked up a couple of seats in the Texas Senate and a dozen in the Texas House.

Maybe Texas has moved from the red political column into the purple one. The GOP strength in the state’s suburbs has been weakening, and national and out-of-state political pundits have been infected with the “Is Texas turning blue?” speculation familiar to the state’s natives.

Another possibility has to be included in the argument: Having a big spender, even a loser, in a race at the top of the ticket helps a political party’s down-ballot candidates. O’Rourke lost, but the excitement around that campaign — by both Democratic and Republican voters — boosted turnout for that midterm election to presidential election levels.

In 2020, presidential-level turnout should be a given. It’s hard to hide from a national race. But the state no longer has straight-ticket voting, as it did in 2018 (this is in litigation, but straight-ticket voting is dead for the moment), raising a question about how a good showing at the top of the ticket might help a party’s down-ballot candidates. And the campaigns at the top of the ticket aren’t spending big money in Texas.

New reports are due in the next few days, but through mid-year, according to CRP, the Senate race in Texas — with Cornyn and Hegar and the candidates who lost to them in the Republican and Democratic primaries — saw lower spending than contests in smaller states: Kentucky, Arizona, South Carolina, Maine, Michigan and Colorado.


To be fair, Hegar’s July report reflected the high spending and low cash-on-hand totals one might expect from a candidate who was then in the middle of a primary runoff election, and she’s getting some help from U.S. Senate Democrats. The numbers then were lopsided in Cornyn’s favor: He had $14.5 million on hand to her $900,000. And you’ve seen the results on television, among other places. The incumbent has been advertising for weeks. Hegar’s commercials have been sparse in comparison.

This is not a requiem. Far from it: Texas is still in pre-game mode. Early voting starts in two weeks (this is also in the courts, but currently on for October 13). Presidential debates have begun. Hegar and Cornyn have a debate scheduled for October 9. Texans can register to vote until October 5.

The season is here. Voting will be over in five weeks, and we’ll have answers to all of our burning questions some time after that. A couple of those questions are related to finance and political trends. Was the 2018 election in Texas — with its high turnout and close races — the result of a spectacular and expensive competition for Senate? Or was it evidence of a more engaged and more evenly divided electorate?