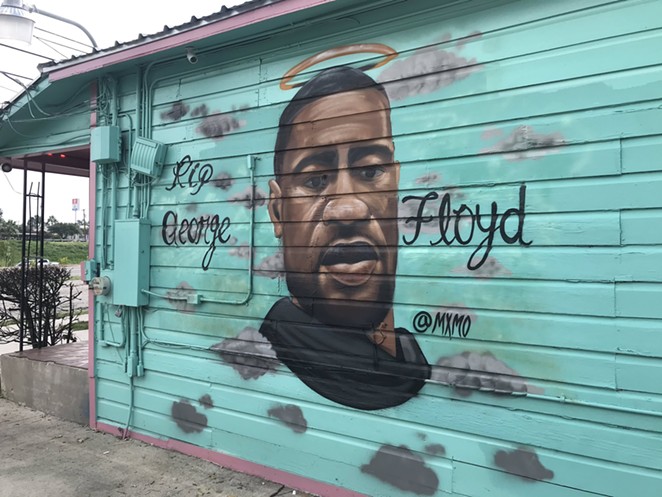 Hundreds of law enforcement officers, National Guard units and a specialized U.S. Border Patrol team were dispatched to a Houston suburb during the burial for George Floyd, the man whose death in police custody reenergized national outrage over the treatment of Black Americans at the hands of law enforcement.

Documents obtained by the American Civil Liberties Union of Texas show that local, state and federal law enforcement teams were on hand to quell any violence with officers that included 66 snipers and special agents of the Border Patrol’s BORTAC unit. That tactical team “provides an immediate response capability to emergent and high-risk incidents requiring specialized skills and tactics,” according to Customs and Border Protection. The Texas Department of Public Safety participated and contributed to the sniper teams, and the FBI was also on hand and used aircraft to monitor the event.

Customs and Border Protection. The Texas Department of Public Safety Shaw Drake, policy counsel of the ACLU of Texas Border Rights Center, said use of deadly force is a standing option for law enforcement officers under current law. But he added that the deployment of specialized CBP officers to the funeral for a man who died because of excessive police force makes the tactic more egregious.

“CBP is the largest law enforcement agency in the country, and also the least accountable,” he said in a statement. “It’s disturbing to see they made preparations to tear gas or kill people who were mourning another death at the hands of police.”

The information was first reported by Vice News on Thursday after it received the records obtained by the ACLU through open-records requests. The security plan from the city of Pearland, labeled “highly confidential,” lists the rules of engagement at four levels. That included the use of tear gas munitions and “field force” by the BORTAC units if projectiles like bricks or water bottles were used by protesters or counter-protesters. There is no description of what qualified a disturbance at the highest level, but a note under that classification said that officers’ use of “deadly force is authorized anytime” under the Texas Penal Code for self-defense or the defense of other persons if circumstances warranted it.

An executive summary of the event and the preparations obtained through the records requests notes that officials expected a crowd of several hundred to as many as 60,000. The memo also includes screen shots of social media posts that alarmed citizens and law enforcement officers. They include threats of looting and “war” in local neighborhoods if change didn’t happen soon.

“The combination of the planned entombment and the social media chatter caused significant concern from Pearland residents,” the memo states.

Pearland police responded to only two incidences, however, which “could have had negative outcomes but did not, due in large part to the planning and engagement of the Incident Management Team,” according to the summary. The cost of the operation was more than $326,000, according to the document.

Assistant Chief Chad Randall of the Pearland Police Department told the Houston Chronicle the city needed to be prepared for the unexpected.

“With such an emotionally charged event we were unsure who else may have been drawn to this event with ill intentions,” he told the publication. “We had the duty to protect Mr. Floyd’s family, those in attendance, and our residents. Our concern was to create the proper atmosphere for a safe event.”

Texas police departments were criticized this summer for officers’ use of force on protesters demonstrating against law enforcement’s disproportionate use of violence against people of color. Austin police officers shot two protesters in the head with bean bag rounds, seriously wounding both.

Dallas County’s district attorney is probing allegations that officers used unnecessary force during otherwise peaceful protests earlier this year. That city’s police department’s actions drew widespread scrutiny when police used chemical deterrents and rubber bullets to disperse gatherings. One man lost an eye after he was hit with a nonlethal projectile. On June 1, officers detained 674 protesters after they marched onto the Margaret Hunt Hill Bridge. Police Chief U. Reneé Hall, who later said those demonstrators would not be charged, announced her resignation earlier this month after criticisms of police response.

Shawn Mulcahy contributed to this story.