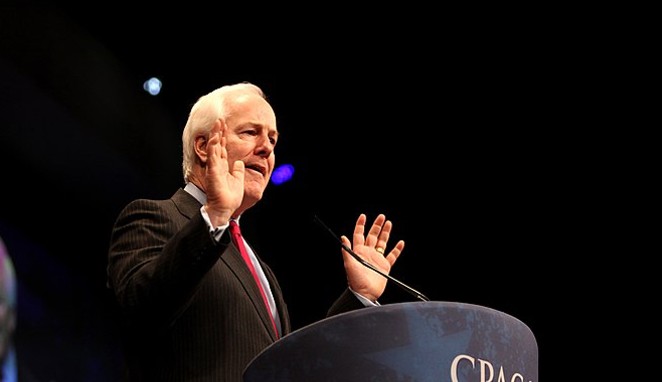 Part of Sen. John Cornyn's ad blitz to recast himself as a moderate has drawn the ire of the AARP, which says the Texas Republican used its logo in a new TV spot without permission.

In the ad, which touts Cornyn's healthcare record, a headline flashes onscreen saying, "AARP thanks Senator Cornyn for voting for key Rx bill," offering no citation for the source of the headline. The logo of the nonprofit, which represents the interests of people over 50, is featured prominently in the shot.

“AARP did not authorize or participate in the production of the Sen. Cornyn’s advertisement. Further, Sen. Cornyn’s ad includes the unauthorized use of AARP’s logo," AARP Texas State Director Tina Tran said in an emailed statement. "AARP has a proud 34-year history of non-partisan voter engagement and does not endorse or oppose candidates, nor does AARP make contributions to political campaigns or candidates.”

AARP spokesman Mark Hollis said staff from his group spoke to the Cornyn campaign yesterday but got no commitment to alter or remove the ad. While Hollis said AARP once thanked the senator for supporting a prescription drug bill, it objects to his use of the logo in a partisan ad.

In the spot, Cornyn says pre-existing medical conditions are "something we all agree should be covered." A voiceover also announces that people with pre-existing conditions will be covered under a plan supported by the lawmaker.

The commercial appears to be an attempt for Cornyn to distance himself from multiple runs at repealing President Barack Obama's Affordable Care Act, which requires to insurers to cover people with pre-existing conditions. In 2017, Politico dubbed the senator "Obamacare repeal's top salesman" based on his enthusiasm for dismantling the law.

The 2019 Protect Act, which Cornyn cosponsored as an alternative to the ACA,  has drawn criticism from consumer groups for not providing similarly strong protections for those with existing conditions.

Politifact rated a claim by Sen. Cory Gardner, R-Colorado, that the Protect Act will shield people with pre-existing conditions as "false," adding that the bill is a "fig leaf for a political problem rather than a means to guarantee protections."

Cornyn is scheduled to debate Democratic opponent MJ Hegar Friday at 7 p.m. Hegar, an Air Force veteran, has made Cornyn's opposition to the ACA a key issue in the campaign.