by Emma Platoff and Shannon Najmabadi, The Texas Tribune 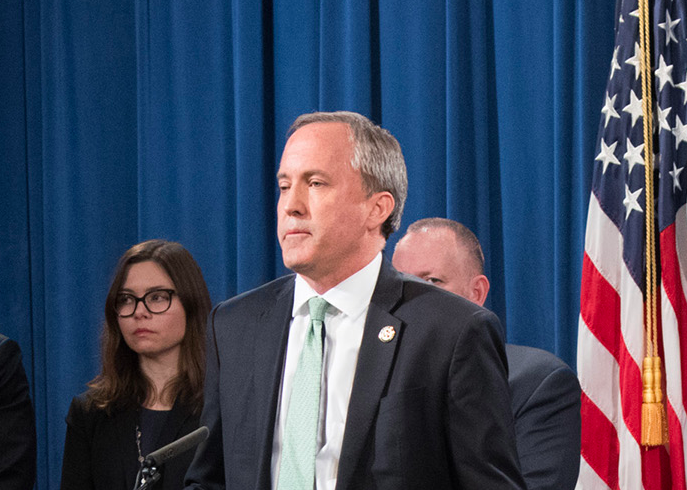 Five senior officials in the Texas Attorney General’s Office accused their boss, Ken Paxton, on Wednesday of subverting his office to serve the financial interests of a political donor, according to an email obtained by the Texas Tribune.

The aides are doubling down on accusations they made last week to law enforcement — that Paxton had committed crimes including bribery and abuse of office — even as the second-term Republican says he’ll forge ahead as the state’s top lawyer under a fresh cloud of criminal allegations and as some in his party call on him to resign.

“It would be a violation of our own public responsibilities and ethical obligations to stand by while the significant power and resources of the Texas Attorney General’s Office are used to serve the interests of a private citizen bent on impeding a federal investigation into his own alleged wrongdoing and advancing his own financial interests,” the aides aides wrote in the email. “We urge you to end this course of conduct immediately.”

Paxton’s office did not immediately return a request for comment Thursday. But he has called the allegations “false” and the employees “rogue.”

Their concerns stem from Paxton’s hiring of special prosecutor Brandon Cammack to investigate claims made by Nate Paul, an Austin real estate investor and donor, of alleged impropriety by federal and state authorities. But several subpoenas served by the prosecutor, the aides said in the email, were "related to private business concerns of Nate Paul" — and were not the subject of the “narrow criminal referral” he was appointed to investigate.

“This office’s continued use of the criminal process, in a matter already determined to be without merit, to benefit the personal interests of Nate Paul, is unconscionable,” they wrote.

The attorney general’s office received Paul’s complaint from the Travis County District Attorney’s Office in June — but only after Paxton reached out to them about Paul’s grievances, Travis County officials said.

The complaint, made by Paul — whose home and office were raided by the FBI last year — alleged wrongdoing by federal authorities including the FBI and a federal magistrate. In the October 7 email, aides said the agency investigated the claims but found they “lacked any good-faith factual basis.” That should have meant the end to the investigation, they said.

Instead, they told Paxton, “You circumvented our office’s long-established outside counsel approval process, over the objections of the executive staff, to engage Mr. Cammack.” Paxton stayed in close touch with Cammack as he investigated, the aides said, citing billing records.

Several of the subpoenas, the aides wrote, appear not to be tied to the complaint, but were instead related to Paul’s business interests. And other subpoenas sought personal contact information for law enforcement officials, “which appear intended for no purpose other than harassment of federal officials who are investigating Nate Paul,” the aides wrote.

One of the subpoenas, obtained by the Tribune, was hand-delivered by Cammack — a criminal defense attorney who has been in practice for about five years — to Amplify Credit Union, which has sued Paul and his firm over unpaid debt.

Michael Wynne, a criminal defense attorney who represents Paul, was present when another subpoena landed at a central Texas bank office, according to a senior official at the Attorney General’s office, and as first reported by the Houston Chronicle.

That seemed “entirely inappropriate, irregular and frankly terribly unethical at a minimum,” said the senior official, who requested anonymity because the official feared repercussions. About 40 subpoenas were issued.

Wynne did not respond to a request for comment but said in an emailed statement Thursday that Paul’s “constitutional rights were egregiously violated” and that they planned to seek “all available legal remedies.”

Cammack is being paid $300 an hour to serve as “outside counsel,” investigating the criminal allegations made in the complaint and compiling a report about any potential criminal charges he comes across. He is not independent, can work only as directed by the office of the Attorney General, and cannot prosecute or indict, his contract says.

After the aides told the attorney general they had alerted law enforcement to his behavior, Paxton “personally directed” two senior aides — David Maxwell, the agency’s director of law enforcement, and Mark Penley, the deputy attorney general for criminal justice who was among the original group of seven whistleblowers — be placed on leave, according the the email.

At a meeting Thursday, Paxton and his new first assistant were asked if the office would continue to release disparaging statements about senior staff who engaged in whistleblower activities, according to the senior official. They refused to respond, the senior official said.

Separate from the latest allegations, Paxton has been under indictment for more than five years on felony securities fraud charges. He has maintained his innocence in that case and has yet to go to trial amid side battles.

Correction, Oct. 9: Due to an editing error, this story originally stated that two aides who reported Attorney General Ken Paxton to law enforcement had resigned. One resigned and one was place on leave.