by Trinady Joslin, The Texas Tribune 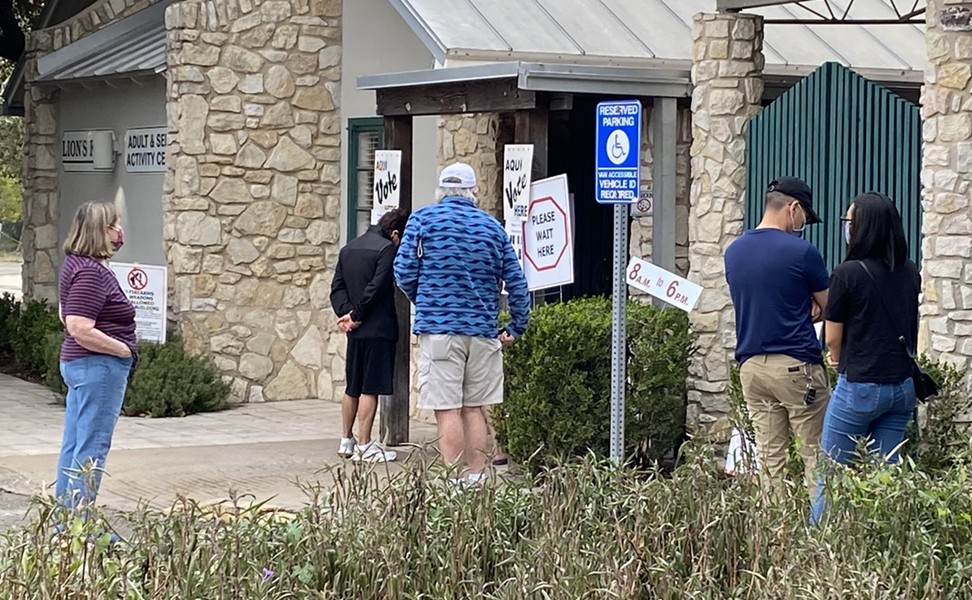 Thousands of Texans spent hours waiting in long lines to early vote over the past 10 days. Many wore masks. Some didn’t.

But the sight of those maskless voters, eight months into the coronavirus pandemic, has surprised and alarmed some Texans, especially as the face covering is required in most public settings across the state.

“I have a decision to go to a restaurant or not, or go inside Walmart, based on their mask policy,” said Jim Lucas, from Hideaway, who early voted in person with his wife Doris and was frustrated to see people without masks. “It's my right to go vote and you're going to put me in that situation? It just sort of irritated us.”

Unlike restaurants or grocery stores, polling locations are one of Gov. Greg Abbott’s 11 exemptions to his statewide mask mandate that went into effect July 3. Abbott said at the time that the exemption is meant to prevent people from being turned away at the polls just because they don’t have a mask, though he has also recommended people wear them. The exemption also covers people actively administering an election. Health experts say that wearing a mask slows spread of the virus.

At least 33 states are requiring or strongly recommending voters wear a mask at the polls, according to an ABC analysis.

But as Election Day nears, some voting rights groups are still trying to change the rule and require masks at polling sites.

In July, Mi Familia Vota, Texas State Conference of the NAACP and two Texas voters filed a lawsuit against Abbott and the Texas Secretary of State over a variety of voting restrictions, including the lack of a mask mandate. They said it could endanger Texas voters, particularly those in minority communities that have been disproportionately impacted by the virus.

“This means a voter who does not believe in wearing a mask has a superior voting right compared to the person who believes in masks and wants to vote in safe conditions according to what's been determined by scientists,” said Gary Bledsoe, President of the Texas NAACP and an Austin-based lawyer.

Bledsoe said a mask mandate wouldn’t stop anyone from voting, but would force poll administrators to direct maskless voters to an isolated area away from other voters.

The suit was initially dismissed by a district judge, who said that while the requests weren’t unreasonable, the state has authority to enact the changes. On October 14, an appeals court ordered the lower court to reconsider some of the requests, including the exemption of polling places from the mask mandate.

Still, local election officials in some parts of the state are strongly encouraging masks.

Dana Debeauvoir, Travis County Clerk, said masks are required in Travis County polling sites, though accommodations will be made so maskless people can still cast ballots.

“I require voters to wear a mask and if they don’t, they don’t lose their right to vote,” Debeauvoir said. ”They certainly are threatening the other voters around them, so I’m going to put them at a voting booth as far away as possible from anybody else so that they won’t get away with threatening fellow voters.”

According to an election advisory message from the Texas Secretary of State’s office, election officials are allowed to encourage voters to wear face masks and can “consider reasonable social distancing measures for voters who are not wearing face coverings,” but they can’t require voters to wear masks when going to vote.

Attorney General Ken Paxton issued a letter on the second day of early voting to remind local election administrators that mask mandates could not be required for election workers.

“My office is receiving reports that certain poll watchers, election clerks, and other individuals administering elections are being barred from executing their duties on account of not wearing a mask or face-covering. This is wrong,” he said in a letter that pointed to Abbott’s executive order. “Political subdivisions may not contravene the Governor's Order. Doing so is unlawful.”

Still, some voters say seeing others in lines has given them unease.

Lucas, from Hideaway, said he and his wife have rarely left their home since the pandemic started, aware that his diabetes and her history with cancer make them more susceptible to the virus.

“(Doris and I) just commented to each other ‘we can't believe they're not wearing masks,’” Lucas said. “We don't know how much more information can be out there. How ignorant you can be, to not care about anyone who's around you?”

Diana Lopez, who lives in Spring Branch, said she also observed people without masks while waiting in line to vote.

At 67-years-old, Lopez could have qualified for a mail-in ballot and avoided the crowds entirely. But the political attacks from leaders over mail in ballots had her worried her vote wouldn't get counted. She said she felt the importance of casting her ballot in-person outweighed her fear of coronavirus.

“I had concerns about it, but I fear Trump more than coronavirus at this point,” Lopez said. “I was willing to do the crazy thing by showing up in person.”

Disclosure: Texas Secretary of State has been a financial supporter of The Texas Tribune, a nonprofit, nonpartisan news organization that is funded in part by donations from members, foundations and corporate sponsors. Financial supporters play no role in the Tribune's journalism. Find a complete list of them here.