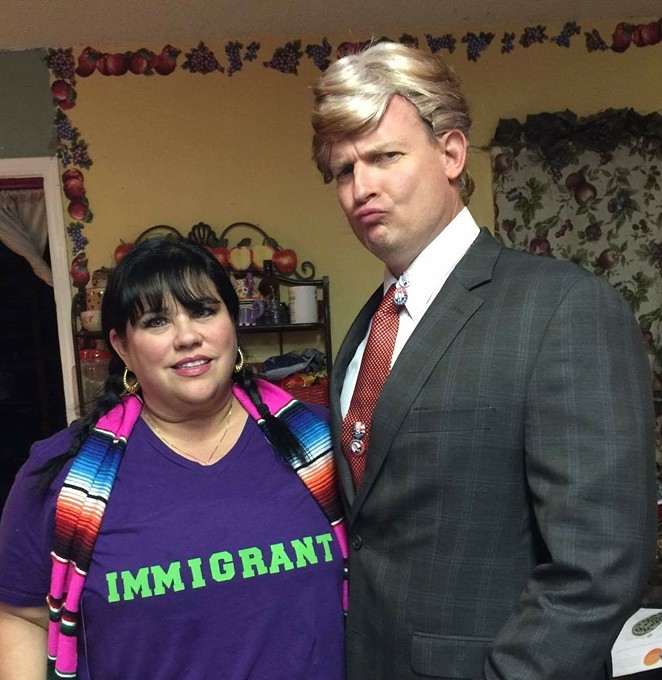 When Donald Trump was declared the winner of the U.S. presidential election on Tuesday, November 8, 2016, San Antonio stay-at-home mom and Hillary Clinton supporter Celeste Tidwell wept at her sister’s house. Her husband Dave, a prison contractor and avid Trump supporter, was at home, beside himself.

“It was 2:30 in the morning and I was wired,” Dave recalled during a recent interview with the Current. “All night long, I watched MSNBC, with those two pathetic losers Brian Williams and Rachel Maddow, call every state red. They couldn’t handle it.”

The Tidwells were one of three local couples the Current featured in a September 2016 article titled “It’s Not Easy Being a Politically Opposed Couple, Especially This Election.” They are the only couple of the three who agreed to a follow-up article when the Current approached them again this September. They’re also the only couple of the three that’s still together. Both couples that are no longer married or engaged said politics had nothing to do with their split.

“We’ve survived,” Celeste Tidwell said. “Maybe it’s because we’ve been married so long, but we had already gone through all the trials and tribulations of a marriage. I actually think we’re stronger than ever.”

Today, the Tidwells might be basking in a 20-year marriage, but their political disputes are as heated as ever. Unsurprisingly, Celeste will be casting her vote for former U.S. vice president Joe Biden in the 2020 presidential election. Dave is sticking to Trump, or as he describes him, “the best president since Abraham Lincoln.”

Celeste says she still cringes when Dave says things like that or when he refers to Trump as “God” to annoy her. It might be one of the reasons Celeste keeps deleting his Tucker Carlson Tonight episodes off the DVR and why she tossed one of his MAGA hats in the trash.

“That’s the thing with my wife,” Dave said. “I want to argue over policy, and she wants to get emotional. She won’t argue the facts.”

Celeste contends that her emotions stem from Trump’s overall divisiveness, childish behavior, unwillingness to take responsibility for anything and his racist comments. She wonders why these things don’t bother her husband, especially since she is Latina.

“Nobody can be perfect,” Dave said. “Sometimes I do disagree with how he delivers his message, but that’s just the way he is. You’re not gonna change the guy. He’s gonna do what he wants to do.”

For the past six months, Trump has been doing exactly that during the pandemic. He avoided wearing a facemask despite the U.S. Centers for Disease Control and Prevention advising in early April that wearing them helps prevent the spread of COVID-19. An outbreak of the virus occurred at the White House in early October and infected the president and the First Lady along with numerous staff, advisers, visitors, journalists and others.

“I think the numbers are actually much lower than what they are,” Dave said. “I believe years down the road that we’ll find out there wasn’t over 200,000 deaths. I think a lot has to do with politics. I think California and New York and other liberal states tanked their economies to make the president look bad.”

The Tidwells’ conflicting politics has also trickled down to their children. Their three daughters — ranging in age from 20 to 29 — are liberal like their mother. Their 17-year-old son has a conservative side, so Dave taps into that as much as possible. Celeste believes her son sides with his father because “he doesn’t want to let him down.”

Dave doesn’t think Trump is racist. He didn’t watch the first debate between Trump and Biden, so he can’t say why Trump didn’t denounce white supremacy when given the opportunity.

When it comes to race, however, Dave would rather talk about why he’ll never watch another NBA game again and why Black Lives Matter is a “horrible organization.”

“Left-wing socialists want to completely change our country,” Dave said. “Trump is not for white supremacy. He’s for doing the right things. If Biden wins, he’s going to be persuaded by all that left-wing crap. I can’t even fathom the socialism.”

Celeste scoffs at the idea that the U.S. will become a socialist country if Biden is elected. She said the S-word is a fearmongering tactic used by Trump supporters and has no basis in reality.

“That’s fantasy-world stuff and is not gonna happen,” Celeste said. “Dave can go a little overboard with that.”

With less than two weeks to go before Election Day, the Tidwells have decided to watch the results come in at home this year. Together.

Celeste predicts Biden will win by 14 points. Dave thinks Trump will win by a hair but doesn’t care about the final count. These days, he’s just trying not to be too concerned about how many Biden campaign posters are going to end up on his front lawn.

“I’ll just wear my MAGA hat till then,” Dave said. “Plus, I like to pick my battles.”