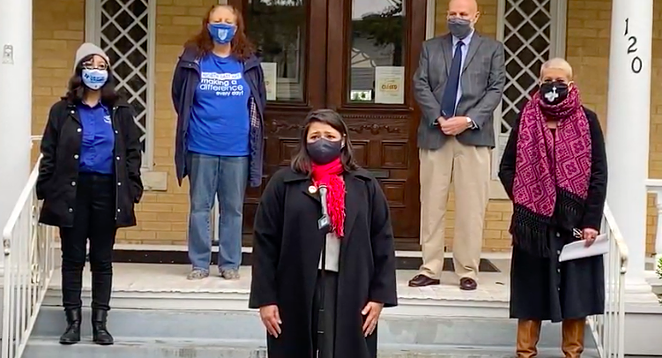 The TV spot in question suggests Allison, a Republican, enjoys the support of local teachers groups while his Democratic rival falsely claimed on a campaign flyer that she has AFT backing.

"Celina Montoya claims she’s endorsed by this teacher group," a narrator says as an image of the AFT logo flashes onscreen with a red slash through it. "Problem is, she wasn’t. That’s a lie."

While the Texas AFT hasn't endorsed either candidate in the race for House District 121, three San Antonio affiliates of the union showed up at a Tuesday press conference to say they have endorsed Montoya.

The Allison campaign didn't return a request for comment.

"These past years we have been able to make small strides through our union advocacy efforts, but until we change our current political leadership, our efforts will not make the enormous changes we need to change public education in Texas," Northside AFT organizer Melina Espiritu-Azocar said at the event.

During the presser, Montoya spoke of her own public school education and called for better funding for Texas schools and a science-based curriculum. The state's Republican leadership has also turned its back on teachers and school staff during the pandemic, she added.

In 2018, Allison beat Montoya by eight points for the District 121 seat, and Democrats have made this year's race a high-priority target as they look to flip the Texas House.