After backing away from Trump in media interview, Cornyn and ally sing a different tune on the road 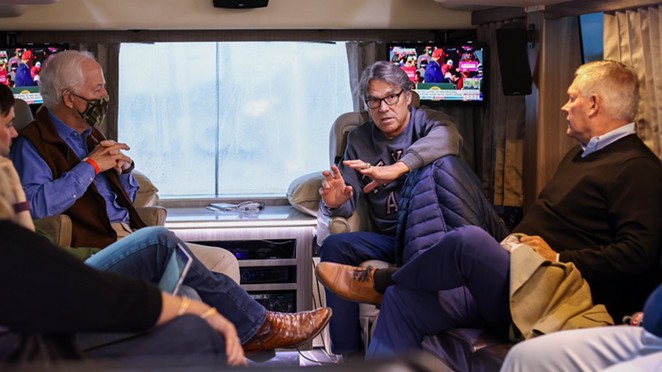 John Cornyn and his surrogates might want to get this "am-I-with-Trump-or-am-I-distancing-myself-from-him?" thing sorted before he takes his current campaign road trip much further.

Facing a tougher-than-expected reelection fight, Cornyn last month joined the gaggle of GOP lawmakers now backing away from Trump, telling the Fort Worth Star-Telegram editorial board that he disagreed with the president on many issues. However, he said he's done that privately rather than in public.

Was that another Perry "oops" moment, or was the one-time Trump energy secretary on message with Cornyn?

Looks like it may have been the latter. During his time at the mic, Cornyn declared Trump more qualified to deal with the COVID-19 crisis than rival Joe Biden, according to the Tribune.

The appearance was part of a home-stretch statewide bus tour for Cornyn. We'll see how the senator's message on Trump varies stop to stop — or as new poll numbers in his race against Democrat MJ Hegar come in.