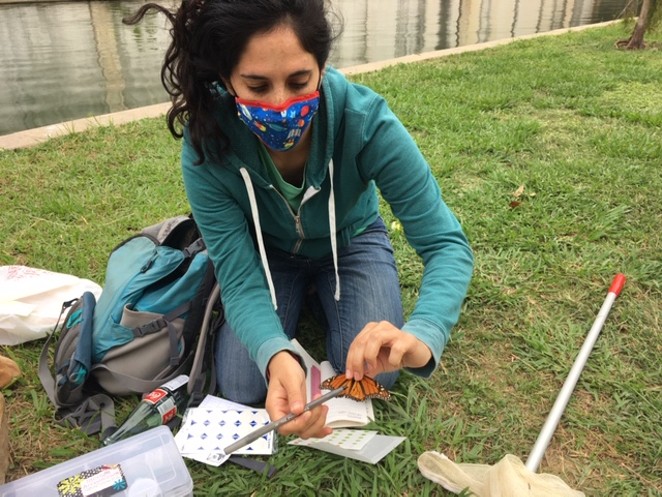 Rebecca Zerlin spent her Saturday afternoon catching butterflies at a registered Monarch Butterfly Waystation in the King William neighborhood as a part of a large-scale program to tag the migrating insects.

San Antonio sits in the heart of the Texas Funnel, the migratory pathway for monarchs traveling east of the Rocky Mountains on their annual overwintering flight from Canada to Mexico. Peak migration through our area typically occurs in mid and late October.

"Pollinators are a really important," Zerlin told the Current. "One out of every three bites we take is because of pollinators, so we need them."

Zerlin, who's in Texas A&M University of Kingsville's Rangeland and Wildlife Studies master's program, captured a male monarch using a net and placed a small sticker on the outside of its wing with a unique letter and number combination that can be used to track the insect's location.

As monarchs move south through San Antonio, they stop for nectar sources to build fat reserves and fuel up for winter. As pollinators, monarchs make it possible for plants to produce food needed to feed people and wildlife.

Threats to the monarchs' native habitats have decimated their population, making urban habitats such as the River Walk Waystation all the more vital. Monarchs use the stations, which are planted with milkweed and other nectar sources, to rest, refuel and lay eggs.

Tagging monarchs during the fall migration helps inform researchers on the best preservation practices for the sensitive arthropod population.

In 2015, San Antonio became the first U.S. city to be named a Monarch Champion City by the National Wildlife Foundation. More than six acres of pollinator habitats have been installed on city property, according to the Texas Butterfly Ranch.

San Antonio currently has 116 official Waystations, many of them on private property such as residential gardens, according to the Monarch Watch registry.

The Monarch Watch tagging program was initiated in 1992 to help understand the patterns of monarchs' fall migration through tag and recapture.

Tagging helps answer questions about the origin of monarchs that reach Mexico, the timing and pace it takes to reach their destination, the rate of mortality during migration and the changes in geographic distribution.

While contributing to the monarch database, Zerlin is also fielding information for her graduate studies, which focus on how land burns affect the butterfly population.

Scientist involved in the study identified changes in weather, landscape and plant coverage as well as intensive agriculture surrounding the nature preserves as causes of the plummeting population.

"We need those guys," Zerlin said. "The butterflies and bees provide food for us."

When taggers catch a monarch for the program, they are instructed to hold it between their thumb and index finger along the leading edge of the forewing.

They then place the tag on the discal cell, a mitten shaped portion of the wing, so it doesn't interfere with flight. Taggers record the tag number, location and gender of the butterfly. They identify the latter by a spotted pouch on males and the absence of one on females.

Monarchs typically reach Mexico between late October and mid-November, depending on weather and wind patterns. The butterflies are often recovered by people who aren't in the Monarch Watch tagging program. They're asked to submit a recovery form so information can be added to the database.

While monarchs won't be fluttering through San Antonio much longer this season, volunteer citizen scientist can still get involved by ordering supply kits and butterfly nets from monarchwatch.org. Monarch recovery information and proper catch and release methods are available on the project's website.