Here's how votes are counted in Texas 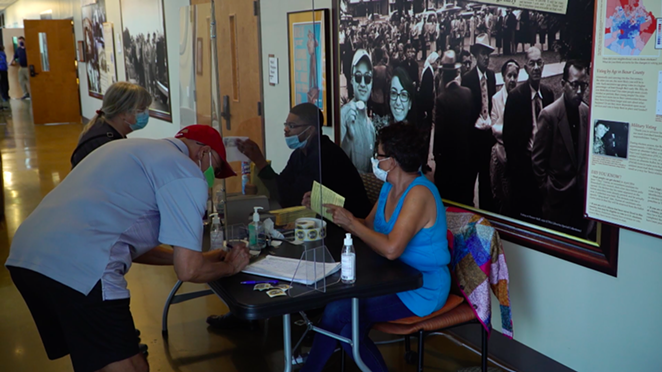 This coverage is made possible by Votebeat, a nonpartisan reporting project covering local election integrity and voting access. The article is available for reprint under the terms of Votebeat’s republishing policy.

There are more votes than ever to count in Texas this year: A record-breaking 9.7 million people cast ballots during Texas’ early voting period — 8.7 million of those were cast in person, and nearly 1 million sent through the mail. By the time Election Day comes and goes, experts predict that the total Texas vote count could reach 12 million.

The state’s 254 counties are responsible for tabulating the ballots, but they must follow a certain set of rules. Here’s how the process works in Texas:

Once the early voting ballot board gets the ballot, officials check whether the voter is registered to vote and may entrust a signature verification committee to match the signature on the envelope to the voter’s absentee ballot application. (They may use other signatures the county has on file.) The signature verification committee must have at least one reviewer from each party, and the majority of its members has to agree that the signature matches. Because of a ruling from the 5th U.S. Circuit Court of Appeals on October 19, Texas officials can reject a mail-in ballot without telling the voter, unlike in states such as California, where voters must be notified of a problem with their ballot and given the opportunity to fix it.

In the counties that use scanning devices to count votes, officials could start opening the envelopes and scanning the ballots in preparation of Election Day. But this process hasn’t gone smoothly everywhere — in Tarrant County, Texas’ third most-populous, the scanners were rejecting about one-third of the mail-in ballotsbecause of illegible bar codes, forcing board members to manually replicate the ballots in order for those votes to be counted. Although the votes can be scanned, they cannot be tallied before Election Day.

The portion of absentee ballots in Texas is larger than usual but smaller than in many other states since Texas is one of the few states that didn’t expand mail-in ballot eligibility requirements during the coronavirus pandemic. Voters had to have an excuse, whether it was being over 65 years old, having a disability, or being out of the county. The risk of getting infected with the coronavirus was not a sufficient reason.

Because of the pandemic, however, Texans were able to vote early in person starting on October 13, providing six more days than in previous years. Voters use three methods to cast their ballots in person, depending on their county. Unlike many other states, Texas does not require a paper record of a person’s vote when using an electronic system. Still, for in-person voting, paper ballots remain the main way many Texans cast ballots, according to the secretary of state’s office. In some locations, the process is analog from start to finish, and ballots are both filled in and counted by hand. In others, voters mark paper ballots, which they then insert into a scanner, which also acts as a tabulating device.

The third method is through direct record electronic systems, or DREs. The voter makes their choices on a touchscreen or using a dial, and presses a “Vote” or “Cast Ballot” button to register their decision. That’s the kind of machine used by Harris County, making it the largest jurisdiction in the country — with 4.7 million residents — whose votes can’t be verified by a paper trail.

The Texas voting system is very decentralized, which means each of its 254 counties might handle the way it processes and counts its votes differently. For example, in Harris County, votes cast on the DRE machine are registered on a memory card, which has to be taken out of the device and transported to a central counting location, uploaded onto a computer and then tallied, the Houston Chronicle reported.

In Kendall County, population 47,431, which will use new equipment this year, the scanning machine is also the tabulator, and the process happens at the precinct level.

Not even the secretary of state’s office, which oversees elections in Texas, was able to tell Votebeat whether most counties do their vote tabulating on the precinct or on the county level.

All counties must, however, notify the secretary of state’s office of their results.

“The counties manually enter the vote totals into our system (TEAM, the state’s election interface) on election night,” Stephen Chang, spokesperson for the secretary of state’s office, said. “They access a web based application and put the numbers in one digit at a time, one race at a time.”

Most Texas counties report their early vote tallies pretty soon after the polls close at 7 p.m. The in-person Election Day count across the state usually comes in later, especially since Texas voters can cast a ballot if they are in line when polling sites close at 7 p.m. The polling analysis website FiveThirtyEight estimates that Texas should get most of its tallying done on Tuesday, but the counting might go into Wednesday or Thursday.

That is not the end of the process. Texas has a post-election audit to ensure an accurate count. Districts that use electronic voting systems that do provide a paper record of the vote have to start conducting a partial manual count, also known as canvassing, by Friday, November 6. It has to be done in three precincts or in 1% of the precincts, whichever is the larger number, and be completed by the 21st day after the election.