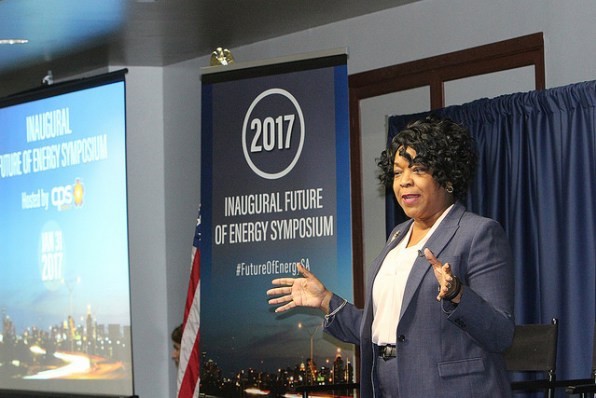 Although CPS Energy suspended disconnections amid the pandemic, the city-owned utility switched off power to a record number of customers during the tenure of current CEO Paula Gold-Williams, a new data analysis shows.

The highest annual number of CPS disconnections of homes and businesses behind on their bills came in 2018, when it switched off power to 99,908 customers, according to data obtained under an open-records request by the Lone Star Chapter of the Sierra Club. The numbers were first reported on the environmental blog Deceleration, operated by Sierra Club organizer Greg Harman.

However, CPS officials said disconnection numbers fluctuate year-to-year based on factors ranging from population growth to weather and don't reflect a policy change under Gold-Williams. If anything, they add, the utility has worked harder recently to accommodate low-income customers.

The 2018 record was set two years after Gold-Williams took the reins at CPS. In 2016, the year she became CEO, the utility switched off power to 90,837 accounts, setting the previous record. The following year, the number dropped to 75,131.

However, the number did spike to 72,000 the year Beneby left. And, in 2019, under Gold-Williams, CPS disconnected 53,391 customers — a number more in line with cut-offs under the previous two CEOs.

Rudy Garza, CPS's chief customer engagement officer, said the 2015 rise in disconnections is likely due to the installation of more smart meters in customer homes, which make cut-offs instantaneous. Previously, some customers may have been able to make last-minute payments before a truck was dispatched to manually make a disconnect.

He also said the numbers fluctuate based on weather, since the utility suspends cutoffs during heat waves or cold snaps. What's more, the higher recent numbers reflect the city's explosive population growth.

"We haven't changed any policies," Garza said. "In other words, we're not any harder today than we were yesterday with respect to how a customer gets to the point in our collections process where they get cut off."

“Some of the numbers I saw, such as the number of summer shutoffs across ZIP Codes, certainly surprised me in relation to CPS Energy’s claims that they don’t perform shutoffs during extreme weather conditions such as heat waves,” Harun said. “Other numbers were less surprising, [reflecting] the existing inequities in San Antonio."

The data analysis comes as community organizations push Mayor Ron Nirenberg and city council to get tougher on the utility over its environmental record and treatment of low-income customers.

Nearly two dozen community organizations — including the Sierra Club — signed a list of policy recommendations submitted last month to the mayor and council. Among their recommendations was a call to stop disconnecting residents who were at or below 200% of the federal poverty line.

"While disconnections are currently paused in response to the economic crisis that has followed the COVID-19 pandemic, other city-owned utilities have begun returning to disconnecting power to the most vulnerable households for non-payment, and it’s just a matter of time before CPS Energy returns to their former behavior," the letter cautions.

CPS's Garza said he doesn't expect any move to end the utility's pandemic moratorium until the middle of next year. What's more, if it permanently halts disconnections for low-income residents, that would require raising rates for other customers to make up for lost revenue.

Neither Nirenberg, council nor CPS has directly responded to the letter calling for an end to disconnects, the Sierra Club's Harman said. However, he added that he's been in touch with Nirenberg's staff and hopes the conversations result in the mayor bringing the issue to CPS's board of directors.

"COVID-19 has severely disrupted the lives of thousands of San Antonio residents," Nirenberg said in a statement supplied to the Current. "We will not abandon people who have been unable to pay their utility bills because of the pandemic."