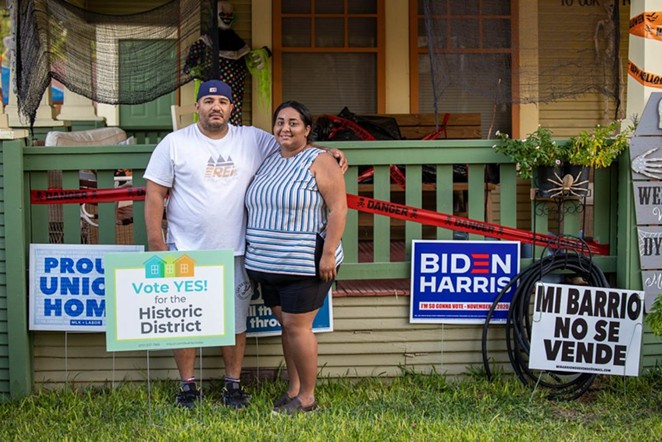 In 2018, Rubi and Charley Lopez purchased their first home together on Monterey Street on the West Side. The 1921 bungalow belonged to Rolando Briseño, a nationally-recognized artist known for his public installations, and whose family lived there for five generations.

This pocket of the near West Side also produced the Cortezes of Mi Tierra restaurant fame, and marketing giant Lionel Sosa. West Side preservationists cite Belle San Miguel Ortiz, who founded the mariachi program a Lanier High School, which paved the way for similar programs across the U.S., and Henry Cisneros, the former San Antonio mayor who served on President Clinton’s cabinet. Comedic icon Carol Burnett. The list goes on.

Soon after their purchase, the 30-somethings started to meet their neighbors and learn more about the history of the West Side, where they both grew up.

“We lived in the West Side, but didn’t know the historical significance of the area,” Rubi said. “I guess you can say we didn’t take the time as kids, teens, and adults to learn about our community’s significance.”

Later, in 2019, the Lopezes began attending meetings of the Historic Westside Residents Association, which had been collaborating with other groups for historic designation on the West Side for many years.

Earlier this year, the couple decided to nominate their part of the near West Side as the Buena Vista Historic District, which spans 10 blocks from South Brazos west to South Zarzamora streets, and roughly from Buena Vista street south to West César E. Chávez Boulevard.

The Lopezes also believe that historical designation will protect the area from rapid growth because, in their view, such a status ultimately preserves homes and culture. Higher-income people have been buying homes on the West Side here and there in recent years. Two major developments in the works, the University of Texas at San Antonio’s planned expansion of its west downtown campus, and the San Antonio Housing Authority’s proposal to demolish the Alazan Courts and replace them with mixed-income apartments, are seen by preservationists as harbingers of gentrification.

“With a lot of things that are happening, as far as growth, we want to preserve and make sure our community has a voice,” said Rubi, who’s a social worker.

[ Download the Lopez’s Statement of Significance for the Buena Vista Historic District. ]

Rudolfo Ortiz, a retired SAPD officer, has been leading the anti-historic district campaign. He’s been distributing hand-painted signs that read “Vote No. Historic District.” Ortiz argues property taxes will rise on the West Side, and will lead to displacement of long-time residents. Supporters argue taxes are going up anyway, and a historic district will actually give homeowners tax breaks for 10 to 15 years—which Ortiz views as a ploy.

“They give you a 10-year tax break, but they’re playing the long game,” said Ortiz, who rents a house on Saunders Avenue from a longtime friend. “You get a few years of tax breaks, but then when the 10 years are up, you’re going to get a huge upgrade in your taxes.” 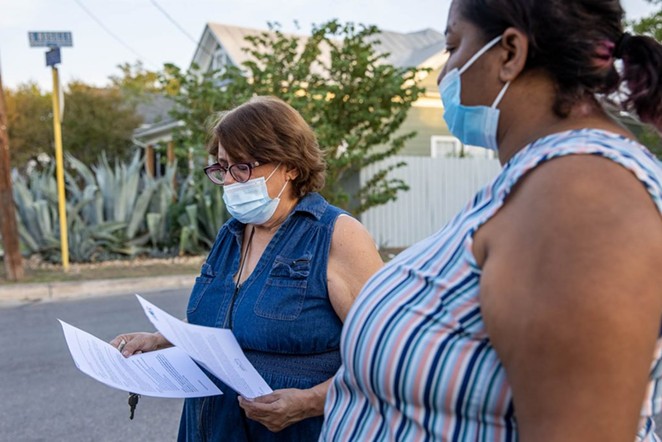 Our place in San Antonio

Inside the proposed Buena Vista Historic District, which is part of the Prospect Hill neighborhood, there are bungalows and Victorian houses, shotgun homes and Queen Annes.

“The Buena Vista Historic District was one of the few communities that welcomed Hispanic homeownership in the 1900s,” the couple wrote to the city. “Homes were built with craftsmanship and have lasted over (hundreds) of years.”

The Historic Westside Residents Association (HWRA) estimates the area boasts an 87% homeownership rate—homes that have been passed down from generation to generation.

Inside the proposed district, the modest shotgun houses have as much value as the Victorian homes, said Teri Castillo, a member of the HWRA.

“Oftentimes people view historic preservation from a Eurocentric lens,” Castillo says. “It’s important for us to honor our history and our place in San Antonio and our role in shaping the West Side.”

Last year, West Side groups began canvassing the area, because 51% of property owners must sign off on the historic designation, according to city rules. Property owners have until June 2021 to cast their votes. The pandemic eventually paused the block walking. The groups and the Lopezes were scheduled to regroup and start canvassing the area once again, now that the election has passed.

Over the summer, the Esperanza Peace & Justice Center, one of the groups that has long advocated for historic designation, along with another group called the Westside Preservation Alliance, successfully obtained historical status for three parcels it owns on South Colorado Street, which comprise the cultural hub Rinconcito de Esperanza. Its desire for a larger district having been slowed by the pandemic, the group pursued a smaller designation as a vital first step. 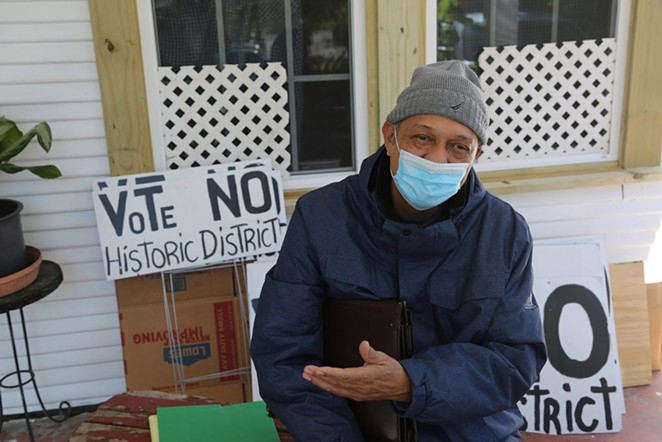 'Pride in the barrio'


Ortiz said he doesn’t need a historic district label, and the brown street signs that come with it, to have pride in the West Side.

Ortiz’s fears West Side residents will be giving up their property rights if they choose to go historic. A historic district, he says, will add more regulations to a ZIP code that has historically seen disinvestment from the city. Because of this, in 2018, District 5 Councilwoman Shirley Gonzales introduced the concept of an equity budget, when funding for streets and sidewalks was distributed to San Antonio’s 10 districts based on need—the West Side was one of the districts that benefited. But those upgrades have yet to be made on Saunders Avenue, and other nearby streets, where Ortiz lives.

Ortiz also points out that 78207 is one of the hardest hit in terms of code compliance violations, and sees homeowners becoming more vulnerable to municipal fines.

Shanon Miller, director of the city’s Office of Historic Preservation (OHP), says property owners in historic districts aren’t required to make improvements to their homes, nor will they be barred from making repairs.

In historic districts, ordinary repairs or minor additions can be reviewed and approved by the OHP staff, without having to go before the Historic and Design Review Commission (HDRC). According to the city, such requests include “paint color, removal of non-historic siding to uncover historic siding, small rear additions.” The HDRC reviews “major additions, changes in exterior materials,” etc.

Denials are rare, according to the city. If they’re not approved the first go-around, OHP staff will work with the applicant on other options.

In a flyer he’s distributing, Ortiz states the tax breaks for homeowners in historic districts can only be received if they significantly restore their homes—which is false.

In historic districts, all homeowners receive a 20% tax exemption on the city portion of their property tax bill for up to 15 years, provided they remain in the home. Homeowners who “invest 30% of the assessed value of the structure” in rehabilitating their homes are eligible to have their city property taxes frozen for up to 10 years—or frozen for the first five years, then assessed at 50% of the post-rehabbed value for the other five years.

Ortiz argues his neighbors don’t have the disposable income to do enough restoration that would trigger the full exemption on city property taxes.

“We’re the poorest district in the City of San Antonio,” Ortiz said. “You can go talk to any of these residents, they don’t have that kind of money.”

Gabriel Velasquez, executive director of the Avenida Guadalupe Association, argues a historic designation would actually lead to gentrification and would only hurt those that are economically disadvantaged. He sees the appeal of tax breaks as a weak incentive.

“In the short run you might see some savings, but in the long run you raise the property values of everybody around you, because it doesn’t matter whether they give you a tax break—it really doesn’t matter,” Velasquez said. “In the ripple effect, it affects people who don’t have money.

“In neighborhoods of poverty, if the homeowner is poor then the regulatory advantage represents a disadvantage, because it assumes an economically level playing field, which cannot be supported in a neighborhood whose economic position is that of the poorest in San Antonio.”

Gonzales, whose eight-year term as a council member will have expired by the time the issued is resolved in June 2021, isn’t taking sides.

She believes that historic status can reduce taxes, but she mentions that homeowners over 65, or with disabilities, are already paying lower taxes. Aside from meetings with the Lopezes, she says she’s only heard from property owners against the district.

“I have not heard anyone else say they want it,” Gonzales said. “That is not to say there aren’t plenty of people who do, but they tend to be less vocal.” 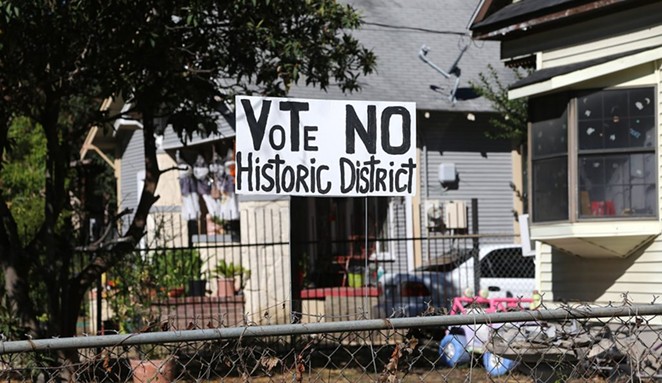 
Miller is not certain whether gentrification will happen on the West Side, but she states that property values, and therefore taxes, are already increasing across the city—with or without historical designation. She says property values rise because people move into the central part of the city, partly because of the attraction of historic districts.

“All the things people love about historic neighborhoods are what are really driving property values,” she said.

Linda Ortega, a member of the HWRA, sounds certain developers will have their way if historical designation is not obtained.

Theodore Turner, a 48-year-old architect who moved to North Pinto Street in 2000, opposes the initiative. He believes that the neighborhood has made some improvements despite ongoing perceptions of frequent crime and violence, and he sees historical designation as stunting the natural growth and change of the neighborhood.

“As far as historic, that’s a harder part for me; I think there are times and places where that’s appropriate but it seems like an added burden for a neighborhood that’s just above the margin of being a poor neighborhood,” he said.

Leticia Sanchez, co-chairperson of the HWRA, says the designation is about San Antonio recognizing the value of the West Side.

“We feel that our historic West Side has been overlooked by the city, neglected, and has not been valued,” Sanchez said. “We want the rest of San Antonio to value our neighborhood as we do. And we feel this historic designation will help the city to see how valuable it is.” 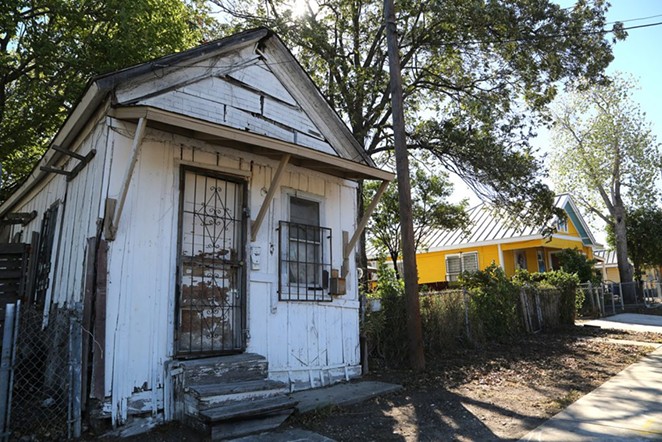 Renee Gonzalez is a freelance writer in San Antonio.