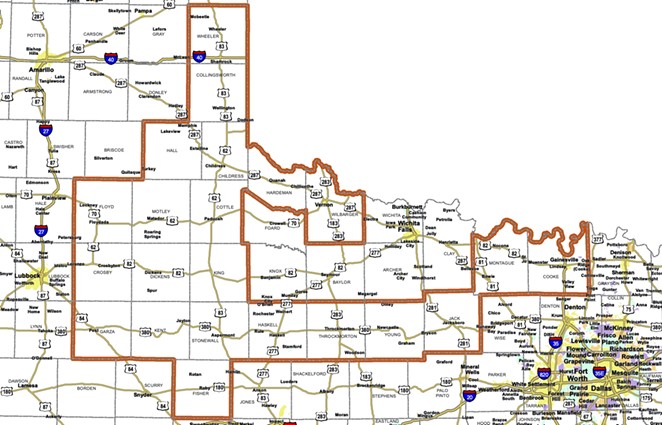 The bluebonnet is Texas’ state flower. The pecan its state tree.

Springer represents Texas House District 68, which is one of the most blatantly gerrymandered districts in the state. It covers 22 counties from the Panhandle, across the Llano Estacado and into North Texas’ Red River region.

“Gerrymandering has been great for me,” Springer said. “I wouldn’t be where I am today if not for the kooky way my district is drawn. My part of the state is white, pro-life, pro-gun and conservative. So, it’s nice running a race I know I can always win.”

Texas GOP Chairman Allan West said Springer came to him for suggestions on which form of voter suppression to recognize with a resolution.

“There are so many voter suppression tactics to choose from, especially when it comes to disenfranchising minorities,” said West. “Voter ID laws. Limits on who can vote by mail. Limits on who can vote curbside. Denying prisoners and people with felony records the right to vote. ‘Accidentally’ unregistering voters with Black and Latino surnames,” he added with a wink and a nod.

Springer said it was important to file the gerrymandering resolution this year, since the Texas Legislature will take up redistricting when it convenes in January. He said he wants to keep his fellow Republicans focused on obscuring the lines, especially since presumptive House Speaker Dade Phelan has a reputation for working well with both parties.

“The last thing we need is compromise,” Springer said. “That ‘blue wave’ was bullshit. We need to crush all hope now that we have this redistricting opportunity, and shrewd redistricting is our best shot. My resolution making gerrymandering the official form of vote-rigging in Texas hammers that home.”