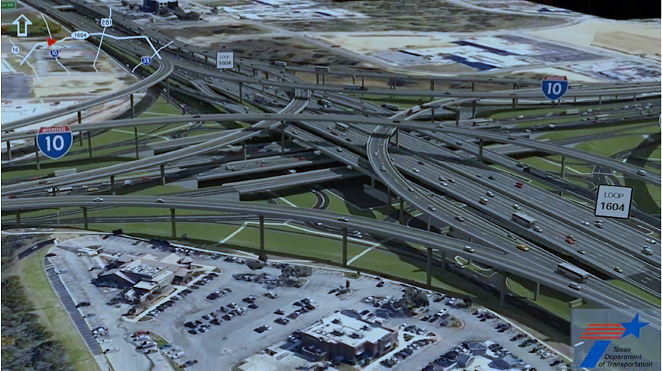 A new report by a pair of watchdog groups names the proposed $1.36 billion expansion of San Antonio's Loop 1604 as one of the six biggest highway boondoggles in the U.S.

In their sixth annual report on the most wasteful U.S. highway projects, the TexPIRG Education Fund and Frontier Group raise concerns that the state's plan to expand the suburban loop risks environmental damage to the Edwards Aquifer while doing nothing to remedy highway congestion.

The Texas Department of Transportation is reviewing plans to expand a 23-mile stretch of 1604 look between Highway 16 and Interstate 35. The six additional lanes, new frontage roads and five-level interchange would be built over the aquifer's recharge zone. Construction is expected to begin next year.

The report also points out that studies by urban planners show similar expansions in Texas cities haven't kept up with traffic growth. Despite a 2010 project that widened a northern portion of Loop 410, that stretch remains one of the state's most congested highways.

"This doesn't solve congestion," TexPIRG Director Bay Scoggin said during a press call about the report. "We're risking all of this damage to the ecosystem, to the aquifer, for nothing."

The new construction on 1604 "may indirectly affect underlying groundwater quality ... through the erosion of disturbed soils and spills of construction related materials," according to the project’s own Draft Environmental Assessment, released in August 2020.

Once the highway goes into use, "the additional impervious cover would accumulate pollutants which may infiltrate to the underlying groundwater if the runoff is not treated," the document also states.

That construction, coupled with additional population density provides additional environmental risk to the area where rainwater drains back into the aquifer that serves as a primary source of San Antonio's drinking water, she said.

"The scientists flat-out tell us the fewer people living out there the better," Peace added.