Ahead of the holiday season, Texas' ICU capacity is the lowest since the start of the pandemic

by Shawn Mulcahy and Carla Astudillo, The Texas Tribune 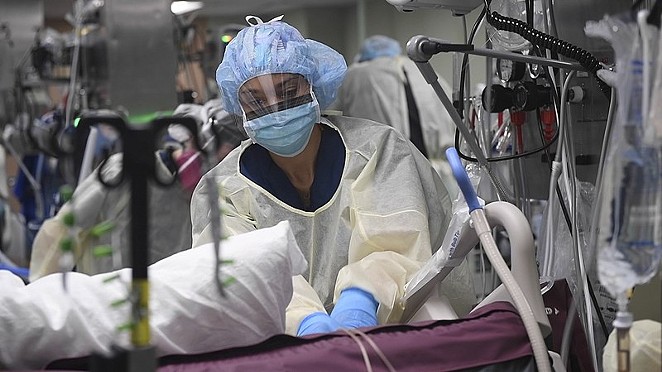 Heading into another holiday season, Texas has the fewest number of available intensive care beds to care for its sickest patients since the pandemic began, leaving health care experts worried hospitals could be pushed to the brink as coronavirus cases continue to climb.

Intensive care units were full in at least 28 hospitals spread across Texas for the week ending Nov. 27, according to a Texas Tribune analysis of data released by the U.S. Department of Health and Human Services. More than 160 hospitals reported having less than 15% of their ICU beds available during the same period.

“It has been a daily struggle for many months, but particularly the last few weeks,” said Tom Cummins, chief medical officer for UT Health East Texas. “I fully expect to see another rise over the next few weeks.”


The Texas Tribune analyzed data for 200 of the largest hospitals that reported four or more ICU beds or ICU patients across the state. The numbers represent seven-day averages that were self-reported to the federal government.

There were 9,045 people in hospitals with COVID-19 as of Thursday, according to state data, near the record level last seen in late July.

The crush of demand for ICU beds is, in part, because many people put off treatment for non-coronavirus illnesses in the early months of the pandemic, Cummins said. Now, people are returning to emergency rooms with more severe complications for conditions like heart attacks and strokes.

Hospitals with full ICUs spanned all corners of the state, from El Paso to Dallas. Among them were the 44-bed Starr County Memorial Hospital in the small border town of Rio Grande City and the 444-bed HCA Houston Healthcare Medical Center, just steps from Hermann Park in Houston.

In Texarkana, an East Texas city along the Arkansas border, Christus St. Michael Health System’s 32-bed ICU has been near or at capacity in recent weeks. Dr. Loren Robinson, vice president of medical affairs, said the hospital is working to add another eight ICU beds and hire more personnel to staff them. She worries that new cases, caused by travel and large gatherings for Thanksgiving, could further strain the community’s medical resources.

“We won’t see the impact of all of that travel for the next week and half,” Robinson said, adding that numbers have slowly declined over the past week. This gave hospital staff time to plan for another wave of hospitalizations, she said.

Staff at Texas Health Frisco converted beds used for postpartum recovery to medical overflow, faced with an increasing number of patients with COVID-19, said Barclay Berdan, CEO of Texas Health Resources, one of the largest hospital systems in North Texas.

“At this point, we have the highest census of COVID-positive patients that we’ve ever had, spread across the system,” Berdan said. New hospitalizations have steadily increased since October, he said.

Beth Powell Surface, who helps prepare hospitals for emergencies for the Piney Woods Regional Advisory Council in Tyler, said she is trying to open spots in hospitals by moving recovering patients out of ICU beds and potentially into different long-term care facilities.

“Our biggest concern is if the numbers continue to go up, making sure that we have pulled all the levers that we possibly can to provide the backup that the hospitals need,” Powell Surface said. “Health care workers are doing everything they can to accept as many patients as they can to get into the right level of care.”

Texas Medical Center hospitals in Houston exceeded base ICU capacity Thursday for the first time since cases of COVID-19 surged this summer, the Houston Chronicle reported. That prompted hospitals to return to Phase 2 surge planning, in which regular beds are converted to ICU beds.

Ahead of yet another potentially catastrophic influx of cases caused by holiday celebrations, hospitals could be pushed to their limits, said Cummins of UT Health. He said people must avoid large gatherings and follow recommended health protocols, such as frequently washing hands and wearing masks.

“The specter of the Christmas holiday is very nerve-wracking for hospitals,” Cummins said.

Disclosure: UT Health has been a financial supporter of The Texas Tribune, a nonprofit, nonpartisan news organization that is funded in part by donations from members, foundations and corporate sponsors. Financial supporters play no role in the Tribune's journalism. Find a complete list of them here.