After a year of racial reckoning, Black lawmakers believe they can finally eliminate Confederate Heroes Day in Texas

By Neelam Bohra, The Texas Tribune 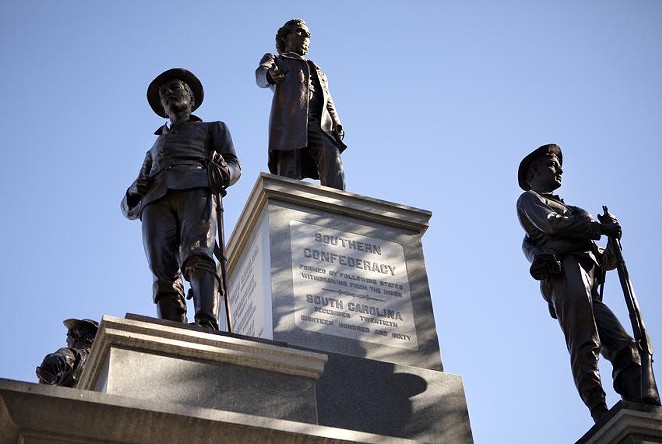 The day after Martin Luther King Jr. Day, a federal holiday honoring a leader of the American civil rights movement, some Texas employees will also take a paid day off this Tuesday for Confederate Heroes Day — a state holiday falling on Robert E. Lee’s birthday, intended to celebrate him, Jefferson Davis and other Confederate soldiers.

For years, a handful of Texas lawmakers have tried in vain to pass legislation that would remove or replace the holiday celebrating leaders of the Confederate army.

But they say this year feels different.

Demonstrators across the nation spent months over the summer protesting police brutality and racial injustice, leading many states to initiate mass removals of Confederate memorials.

“The killing of George Floyd, a Texan, and the killing of Atatiana Jefferson, another Texan, at the hands of law enforcement, certainly do underscore the importance of removing a day of remembrance that brings to the mind slavery and oppression,” said state Rep. Nicole Collier, D-Fort Worth, chairperson of the Legislative Black Caucus.

The birthdays of Lee and Davis used to be separate Texas holidays, but lawmakers consolidated them in 1973 to create Confederate Heroes Day.

“This is an opportunity for us to bring and shine light on social injustice, how Black people across this country have been demonized and have been treated unfairly by the judicial system, the criminal justice system,” Johnson said. “I think this is another way that we have to wipe away and erase harmful, hurtful imagery that continues to remind us of our horrible past.”

Johnson filed the same bill to abolish the holiday during the 2019 legislative session, but it never got a vote in the State Affairs Committee, which House Speaker Dade Phelan chaired at the time.

Phelan will ensure lawmakers have a “level playing field to advocate for legislation important to them and their communities” this session, said Enrique Marquez, spokesperson for the speaker.

Johnson said he is working with more lawmakers this session and has higher confidence that the bill could pass this year. He plans to hold a press conference with Collier and other representatives at noon on the state holiday.

“I think it’s the right thing to do at the right time to do it,” Johnson said.

State Rep. James White, R-Hillister, said in an interview with The Texas Tribune that he would not support a measure to remove the holiday because he believes all those who fight in war deserve honor, regardless of the cause of a war. White served in the U.S. Army from 1986-92.

“I understand the politics. I have been deployed as a soldier, possibly under unpopular domestic sentiment,” White said. “But the point is, I had raised my right hand to defend the Constitution. And that meant answering to those civilian authorities at that time.”

Terry Ayers, spokesperson for the nonprofit group Descendants of Confederate Veterans, testified against the bill in 2019 and said Johnson wrote it because of “intolerance toward those who hold different opinions than himself.”

In 2015, state Rep. Donna Howard, D-Austin, filed a bill to rename the holiday Civil War Remembrance Day, but it died in committee. But she thinks the Legislature could move to get rid of the holiday this year.

“Now is the perfect time, after everything that we’ve experienced over the past interim with Black Lives Matter, and absolutely increased consciousness about institutional racism and implicit bias,” Howard said. “I don’t know how anybody could justify having a state holiday that dignifies Confederates, especially at this point in time, so I am very hopeful.”

When Jacob Hale, who is from Austin, was 13, he approached Howard to draft the bill to rename the holiday. Now a student at Vanderbilt University, Hale has returned every session to testify on the bill.

“White supremacists cling to the legacy of the Confederacy simply because the Confederates fought for what they believe in,” Hale said. “They believed in subjugating an entire race of people. ... And they’re free to express themselves however they want. They can carry a flag. But that doesn’t mean that you have to officially endorse that cause as a state.”

The day after Confederate Heroes Day, President-elect Joe Biden and Vice President-elect Kamala Harris, the first Black woman to hold the position, will be inaugurated at the U.S. Capitol.

Collier said the irony isn’t lost on her.

“It does bring you pause to say that in between two wonderful, momentous days, that we have to pause to remember and honor individuals who worked to oppress my ancestors,” Collier said.
Stay on top of San Antonio news and views. Sign up for our Weekly Headlines Newsletter.