Analysis: While his powers are questioned, Texas governor reaches for more 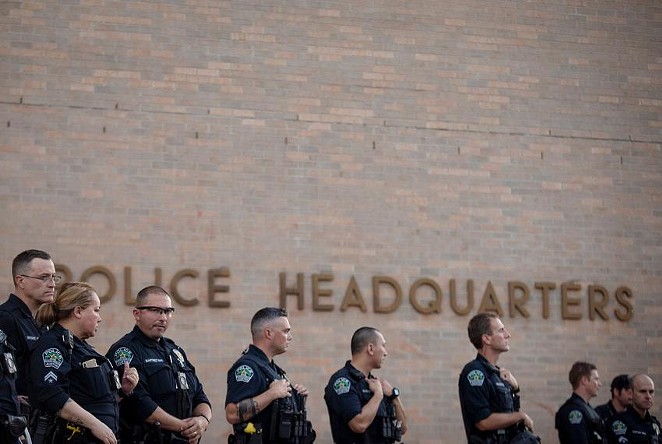 Gov. Greg Abbott says he will push legislation that would allow the state to withhold sales tax money due to local governments that chop their law enforcement budgets.

That trial balloon was launched shortly after the beginning of a legislative session where the governor is facing sharp criticism from legislators and everyday Texans over his use of executive orders to regulate public life and commerce during the pandemic.

Speaking last week at a Texas Public Policy Foundation conference, Abbott told the conservative think tank’s audience he wants to “require the comptroller to hold in abeyance any remittance of the sales tax revenue generated” by such cities “unless and until they step up and do the right thing, and that is to fund their police officers.”

He didn’t offer details, and no legislator has apparently filed a related bill yet. The governor’s comments aren’t entirely a surprise, either, given his reaction when the city of Austin voted to move millions of dollars from its police budget to other, mostly related services not under police control.

The governor and others characterized that as defunding the police — an inappropriate response from local politicians to uses of force by Austin police officers during summer demonstrations against racial injustice and police behavior.

The June killing of George Floyd in the custody of Minneapolis Police sparked those protests, with calls for curbing police brutality, ending systemic racism and shifting public safety dollars to mental health and other law and order-related programs.

Abbott has suggested state police should take over law enforcement in the part of Central Austin that includes downtown, the University of Texas at Austin campus, the Capitol and other state buildings, including the Governor’s Mansion.

In September, he expressed support for a proposal that would consolidate the capital city’s police under the Texas Department of Public Safety. That idea — pushed by former state Reps. Terry Keel of Austin and Ron Wilson of Houston — was the first public suggestion of the state snagging local sales tax money as part of a takeover of local police. Both men are attorneys, and Keel is a former Travis County sheriff.

It’s a political debate disguised as a law-and-order fight. Austin Police have said recent increases in homicide and violent crime pre-date conversations about funding and remaking police departments, and some other large Texas cities where police budgets have increased are also seeing increases in crime. Those crime stats aren’t really tied to police funding, but police funding has been a useful foil for politicians looking for ways to speak out about demonstrations like those last summer.

The governor used the August cuts in Austin as a cudgel during the election campaign, a support-your-local-police appeal to voters who were alarmed by vandalism and violence during those summer demonstrations.

At the same time those were in the news, the governor himself was getting a verbal whipping from lawmakers and residents who thought his coronavirus restrictions on businesses and schools and everyday life had gone too far.

Those efforts also put the governor at odds with local governments, notably in Harris and Dallas counties, where efforts by Democrats in local offices to control the spread of the coronavirus ran afoul of the Republican governor’s ideas. They bickered over mask requirements, over when to allow which kinds of businesses to open and to how many customers at a time, and on and on.

At the same time, Abbott was facing strong resistance from some fellow conservatives, who thought his orders were unnecessarily hard on small businesses, restaurants and bars. They promised legislative attempts to shorten the governor’s leash — now and in future emergencies — based on their experiences during the last year.

Abbott has forged ahead, with mixed results. The state economy, for a variety of reasons, has avoided a headlong crash that some feared. Comptroller Glenn Hegar said earlier this month that the recession that loomed in March has turned, already, into a recovery. Among other things, that means the state budget won’t be as hard to assemble as state officials feared.

COVID-19, however, is at its highest pitch ever, overwhelming hospitals in some areas of Texas and killing people at an unprecedented rate. Vaccine distribution has been lackluster, indefensible. Some local leaders have asked the federal government to cut the state out of the deal and let the cities and counties handle vaccinations.

By some measures, Texas has done better than other states. But given the quality of the vaccine rollout here and elsewhere, that’s no consolation; it’s just a way of saying that while the vaccine situation is rotten in Texas, it’s even worse elsewhere.

Maybe the state is better-suited to police work.

Disclosure: Texas Public Policy Foundation and University of Texas at Austin have been financial supporters of The Texas Tribune, a nonprofit, nonpartisan news organization that is funded in part by donations from members, foundations and corporate sponsors. Financial supporters play no role in the Tribune's journalism. Find a complete list of them here.