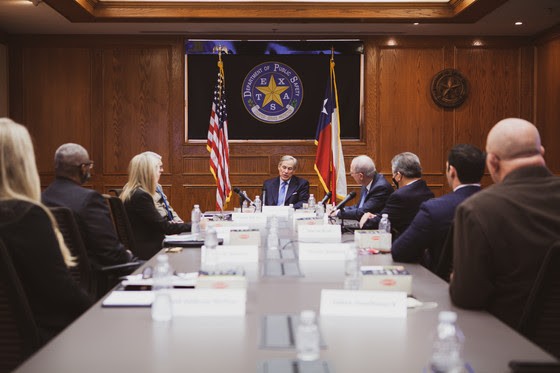 Put a bunch of law enforcement officials in a room and ask them if their budgets should be cut, and the answer will be a resounding "no."

That's exactly what Texas Gov. Greg Abbott did Thursday afternoon in a bit of political theater his office referred to in a press release as a "roundtable discussion" of "legislative priorities to ensure a safer future for the Lone Star State."

Never mind that roundtables are deliberative forums used to foster debate from opposing sides and that engender a certain amount of give and take.

Hard to imagine how there was much give and take when the nine other folks at the Gov's table ranged from Mitch Landry, deputy executive director of the Texas Municipal Police Association to Jennifer Tharp, Comal County's Criminal District Attorney. Four of the listed participants were from police unions.

Notably absent — especially so in the post-George Floyd era — were any police accountability advocates, criminal defense attorneys, people with mental health expertise or even city mayors.

But why would we expect anything different from Abbott?

Like other Republicans, Abbott has been on a law-and-0rder kick lately, figuring that to be a winning ballot-box issue. And his answer to most big issues of the day, whether it's the pandemic or public safety, seems to be "give my office more control."

After Austin's city council voted last fall to shift funds from police coffers into social services, Abbott repeatedly called on the Texas Legislature pass a law barring cities from cutting police budgets. In the wake of that move, he also said he's weighing a state takeover of the Austin's police force.

“Texas is a law-and-order state, and we are going to ensure that we keep it that way,” Abbott said during a press conference that followed Thursday's friendly chat with law enforcement officials.

In addition to reiterating his call for the Lege to tell municipalities how they can spend public safety money, Abbott used the presser to stump for changes to the state bail system that — surprise, surprise — would give him more control. A version of the latter proposal tanked during the 2019 session.

For those who watch Texas politics, Thursday's spectacle is bound to bear echoes of a much-ballyhooed school shooting roundtable Abbott assembled in 2018 after the tragic, 10-fatality shooting at Santa Fe High School.

That gathering included parents, teachers, students, lawmakers and "interest groups that advocate for and against further gun regulations," his office said at the time. Notably absent, though, were gun-control groups Moms Demand Action and March for Our Lives, not to mention leaders from the state's teacher's unions.

After the school shooting roundtable, Abbott — who enjoys a 100% approval rating from the NRA — offered a list of 22 ideas that stemmed from the chat. They ranged from placing cops in front of schools to "mandating parent training." Not a one called for stricter gun-control measures.

Thursday's discussion shows that Abbott still finds value in using roundtables as a political stunt. This time, though, he decided not to worry about the optics and just invite the yes men.