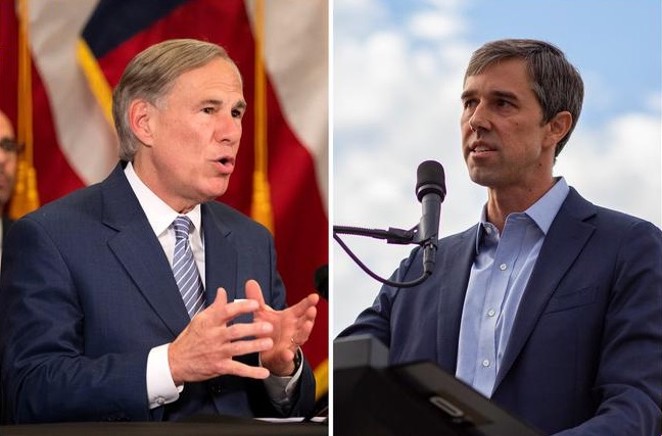 O'Rourke said during an El Paso radio interview earlier this week that a gubernatorial bid is "something I'm going to think about." The comment began receiving wide attention after the Houston Chronicle wrote it up Thursday morning, and during an unrelated news conference hours later in Odessa, Abbott fielded a reporter's question about a potential O'Rourke challenge.

"You’re talking about a person who says they want to run for governor who said, 'Heck yes,' he’s gonna come and take your guns," Abbott said, referring to O'Rourke's 2019 embrace of a mandatory buyback program for assault weapons. "Heck yes, he’s for open borders. Heck yes, he’s for killing the energy sector and fossil fuels in the state of Texas. I don’t think that’s gonna sell real well."

On Thursday evening, O'Rourke responded in a string of eight tweets that took Abbott to task for various parts of his record as governor, starting with his response to the coronavirus pandemic.

"You know what doesn’t 'sell well' @GregAbbott_TX?" O'Rourke said. "The fact that 36,000 Texans have died from Covid. [You] have undermined public health and local leadership at every turn, and now too many of our family, friends and neighbors are dead because of it."

O'Rourke ended by saying, "Whether or not I run, I will do everything in my power to elect a Governor who looks out for everyone, keeps Texans safe, answers to the people instead of the special interests & guarantees that we all have equal opportunity to achieve our best in life."

O'Rourke previously had not ruled out challenging Abbott, but his latest comment on 2022 is his most direct acknowledgment of a potential campaign, especially since the November election.

Abbott won reelection in 2018 by 13 points while O'Rourke came within 3 points of U.S. Sen. Ted Cruz. Abbott is up for a third term next year and is expected to be a formidable opponent for any challenger, with almost $40 million in his campaign war chest.

After dropping out of the 2020 presidential primary, O'Rourke turned his attention back to state politics, plunging into the fight for the Texas House majority through a new political group, Powered by People. Abbott's campaign aggressively used O'Rourke as a boogeyman in the House battle, which ended with Republicans holding on to their 83-member majority.

The morning after the November election, Abbott's top political adviser, Dave Carney said on a conference call with reporters that the governor's campaign had been preparing for 2022 "since literally the day after '18" and that he expected a $100 million "battle." But Carney brushed off the possibility of an O'Rourke challenge, suggesting O'Rourke would be less enticed after Joe Biden failed to flip to Texas — and Donald Trump carried it by a wider-than-expected margin.

"I'll bet you a steak dinner that doesn't happen," Carney said of an O'Rourke 2022 bid.