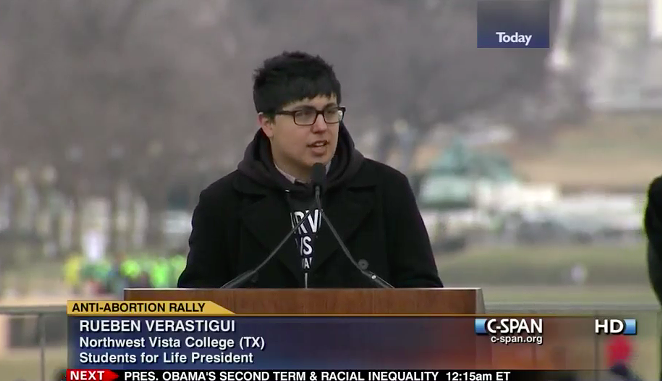 A San Antonio native active in Republican politics was taken into custody by Washington D.C. police on child pornography charges, according to an online arrest record.

A criminal complaint against Ruben Verastigui, 27, accuses him of distributing, receiving and possessing images of child pornography. News site Law & Crime identified him as a one-time aide to former President Donald Trump.

Verastigui's LinkedIn profile lists his current job as communications manager at Citizens For Responsible Energy Solutions, a right-leaning advocacy group. He attended Northwest Vista College in San Antonio from 2011-2014, according to the page.

The LinkedIn profile also lists other political work including a stint as a digital strategist for the Senate Republican Conference and as a senior designer for the Republican National Committee.

Video posted by cable network C-SPAN shows Verastigui speaking at the 2013 March for Life rally in Washington D.C. The clip identifies him as president of the Northwest Vista College Students for Life.

Journalist Jared Holt first brought attention to the arrest on Twitter, sharing graphic excerpts from the criminal complaint. Those include allegations that Verastigui extended an invite to another person during an online chat to come to Washington D.C. "for the purpose of sexually abusing a minor."

NEW: D.C. Police arrested Ruben Verastigui -- a former "senior digital strategist" for the Senate Republican Conference -- on charges of distribution of child pornography resulting from a time span that allegedly included his time at the SRC. How I confirmed ID in thread (1/?) pic.twitter.com/AcZ7c2sBKb