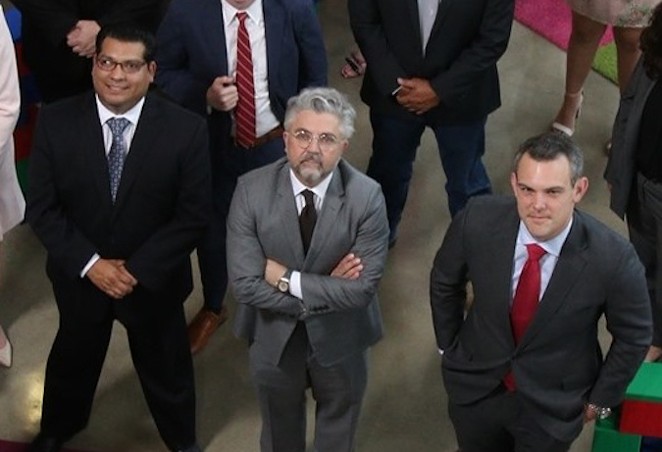 High-profile attorney Martin Phipps, who was arrested Monday, is accused of harassing his then-wife to the point that she fled the country in fear for her life, KSAT reports, citing police documents.

Phipps, 51, whose firm represents Bexar County in its billion-dollar opioid suit, faces misdemeanor charges for telephone harassment of a woman to whom he was briefly married, according to arrest documents obtained by the TV station.

On Monday, a San Antonio Police Department spokeswoman confirmed the arrest to the Current but provided no additional details.

Phipps — a name partner at Phipps Deacon and Purnell and owner of ritzy downtown bar Paramour — was unavailable for comment Tuesday.

The victim told SAPD investigators that she fled to Mexico the day after Christmas following a confrontation with Phipps, KSAT reports. She said Phipps appeared to be on drugs and was acting “in an aggressive and agitated state,” according to the cited warrant.

After the woman left, Phipps sent her roughly 40 electronic messages over a two-day period to “demean, harass, alarm and torment” her, the station reports, again referencing SAPD documents. She returned to the U.S. last month and filed for annulment, according to the report.

The events appear to track with court records cited in an Express-News article that show Phipps and his legal assistant at the time, Brenda I. Vega, wed December 19 and were granted an annulment 34 days later.

Vega, who's 26, alleged in her court filing that Phipps “induced [her] to enter into the marriage by duress,” the daily reports.

Phipps' arrest comes after lawyer T.J. Mayes, a former chief of staff to Bexar County Judge Nelson Wolff, and others at Phipps' firm resigned in January, saying that it was a hostile workplace. Mayes also filed complaints against Phipps with the Equal Employment Opportunity Commission and the Texas Bar Association.

County Judge Nelson Wolff last week told the Current that he'd asked county attorney Larry Roberson to look into what effect the allegations against Phipps could have on a pending settlement of its opioid suit. However, he emphasized that the inquiry was a civil matter and not a criminal probe into Phipps.