'An emergency on top of a pandemic': Texas hospital workers scramble as winter storm hampered operations 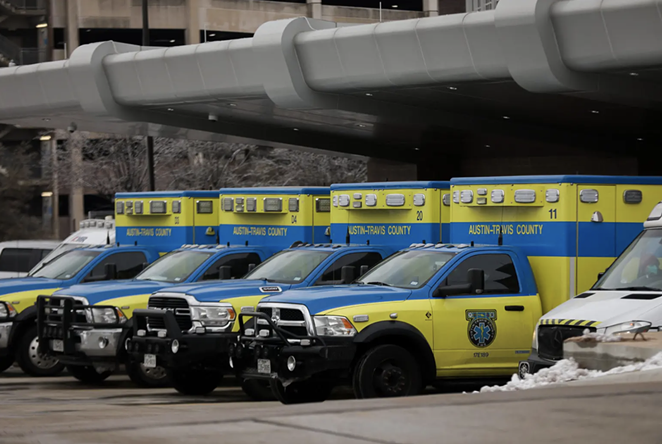 Icy roads kept a pregnant Texas woman from reaching the nearest birthing center early Monday, so, the medical director of the tiny Bayside Community Hospital in rural East Texas delivered her baby in the emergency room.

Hours later, the water shut down.

For the next three days, staffers at three Chambers Health facilities in Anahuac, outside Houston, pumped water from wellness pools, refilled a 275-gallon storage tank three times and carted drums of water between facilities so toilets could be flushed.

Burst pipes and frozen pumps throughout the community were reportedly the issue, said William Kiefer, CEO of Chambers Health.

“If we didn’t have our resources and our people being really clever on how to go about pulling water out of our pool and refilling that [storage tank], we would have been without,” he said. “The city and the county were struggling with their own things. …. As far as help, I don’t think there was really anything they could have done.”

Hospitals across Texas struggled through water outages and food supply disruption in the wake of this week’s historic and debilitating winter storm.

“To see this type of crisis on top of what we’ve dealt with, with the pandemic, and to see how our staff have responded, is one of the most awe-inspiring things that I’ve worked with over the course of my career,” said Doug Lawson, CEO of CHI St. Luke’s Health in Houston.

The Crosbyton Clinic Hospital east of Lubbock took in residents from a nearby nursing home after that facility's roof partially collapsed, according to the Texas Organization of Rural and Community Hospitals, which was monitoring rural hospitals during the week.

In Brady, east of San Angelo, the icy conditions delayed the delivery of clinical supplies and food to the Heart of Texas Healthcare System Hospital, causing hospital staff to turn to local retailers.

At Olney Hamilton Hospital in North Texas, staff spent the night at the hospital to avoid being stranded at home unable to get to work.

“The rural hospitals across Texas have faced similar challenges to urban hospitals with power outages, water stoppages, reduced or no food deliveries, but they are making it work,” said TORCH spokesperson Don McBeath. “Rural areas know they are often on their own, at least for a while, and this is no different.”

At Houston Methodist Hospital, officials faced potential problems when patients were being discharged but had nowhere to go. Officials set up areas for patients to wait comfortably until they were transported home or to hotels if the power and water was out at their homes, said Roberta Schwartz, executive vice president at the hospital.

“It is very hard to have people discharged when you’re sending them home to a house without power,” she said. “You can imagine people’s reluctance to leave where they are.”

Those who had livable conditions to return to were not always able to leave in the snow and ice. That made discharging patients “one of our biggest challenges” during the storm, David Huffstutler, president and CEO of St. David’s HealthCare in the Austin area, said in a Thursday emailed statement.\

“They were closed due to lack of water or power, so everyone who needed services from those places came to the hospital,” she said. “So our emergency room saw record numbers. It was astounding.”

Hospitals canceled elective surgeries, waited days on delayed medication shipments and are having to seek oxygen tanks from outside sources to meet a critical oxygen supply issue, said Carrie Williams, spokesperson for the Texas Hospital Association.

While some issues like deliveries, water pressure and power problems are starting to ease up for some, most in the affected areas are still experiencing challenges, she said.

“For Texas hospitals, this is an emergency on top of a pandemic,” Williams said. “They have been on the front lines now with broken pipes, dwindling supplies and water restrictions. There is unimaginable pressure on everyone, patients and staff and families. They see and feel the desperation, and hospitals are doing whatever they can to be there for people.”

Prolonged freezing temperatures led to several problems with water pressure and water supply for millions of Texas homes, businesses and hospitals. That can severely impact hospitals’ ability to perform basic functions, even beyond flushing the toilets.

Several facilities across the state had seen water issues starting on Monday as local systems froze or electricity problems knocked them offline. But the pressures intensified as residents’ pipes burst, pumping stations froze, boil notices went out and local officials warned residents to stop dripping their faucets to conserve water.

Hospitals in both urban and rural areas reported having tankers bring water in to bring up supply and energize water pressure.

At the South Austin facility, the facility’s heating system, like many hospitals, uses boilers and experienced problems when the pressure dropped, Huffstutler said.

“We were able to get a water truck in to alleviate the issues on the heating system,” he said. “With the water truck and the recirculation of water in the chillers, we were able to create a closed-loop system in the hospital to keep it warm.”

Similar issues were reported at some Arlington and Dallas hospitals as well.

At Houston Methodist West in Houston, staffers collected rainwater in big gray laundry carts on Tuesday and used it to fill buckets for toilet flushing when the water pressure dropped, Schwartz said.

The Dimmit Regional Hospital, a 48-bed facility in Carrizo Springs in South Texas, had no running water in the hospital and was using bottled water for drinking, McBeath said.

In South Texas, water problems temporarily shut down laboratory operations at the Uvalde Memorial Hospital after electricity problems in the city shut down the local water pumps. Pool water was being used to flush toilets at the Refugio County Memorial Hospital, McBeath said.

At CHI St. Luke's Health - The Vintage Hospital in Houston, officials were just hours from shutting down the hospital altogether on Wednesday afternoon until water tankers arrived, Lawson said.

“I’ve only had about three points in my career that we’ve had to actually access tankers of water to ensure that a hospital’s systems remained operational,” Lawson said. “That was one of those days.”

Disclosure: Texas Hospital Association has been a financial supporter of The Texas Tribune, a nonprofit, nonpartisan news organization that is funded in part by donations from members, foundations and corporate sponsors. Financial supporters play no role in the Tribune's journalism. Find a complete list of them here.