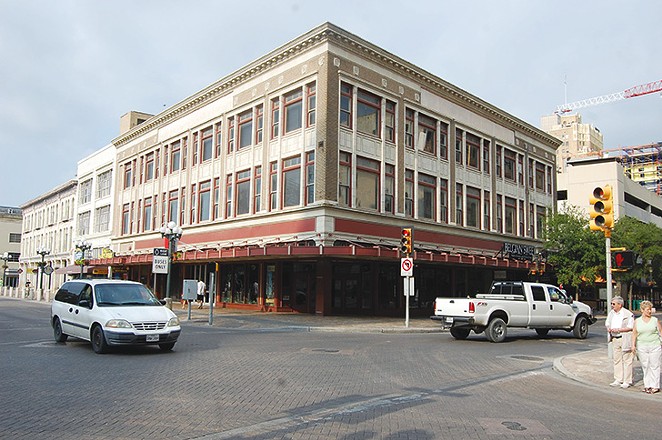 San Antonio's landmark Woolworth Building and its civil rights legacy will be preserved, along with a public civic space, under a new plan for the Alamo Plaza, Mayor Ron Nirenberg said.

“We are going to ensure that the Woolworth and Crockett Buildings remain, that they're not demolished in the plan that moves forward, and that we also retain the openness and civic nature of the plaza,” Nirenberg said at the end of his nightly COVID-19 briefing on Monday, March 1. He also said streets around the Alamo would stay open. “If there is no museum being built, there's no reason to close the roads right now."

The previous plan to remake Alamo Plaza drew a remarkably diverse array of critics. Conservationists and civil-rights groups condemned the plan to put a museum in place of the 100-year-old Woolworth Building, which in March 1960 became the first in the South to peacefully desegregate its lunch counter.

The Plaza, which has traditionally served as San Antonio’s most prominent and most important public forum, would have come under control of the Texas General Land Office, which had said the First Amendment would not apply within the property and public access would be restricted. And descendants of the Alamo were livid that the project would move — and possibly destroy — the Cenotaph, a monument to Alamo defenders who died in the 1836 battle. (Read Mike Greeberg's critique of that plan.)

The $450 million project was neutered last September when the Texas Historical Commission voted 12-2 against issuing a permit to move the Cenotaph.

Bexar County Judge Nelson Wolff, who hosted a day-long symposium a year ago on the Woolworth Building’s importance as an historic civil rights landmark, thanked Nirenberg during the COVID briefing for preserving the buildings and the civic space.

“Mayor, I thank you for speaking up about the heritage of the buildings that we've got there, Kress and Woolworth, and keeping the plaza where people can walk and get through,” Wolff said. “I think that's extremely important. Thank you for taking that position.”

Aaronetta Pierce, tapped by Nirenberg to be a new tri-chair of the Advisory Committee, hailed the mayor’s pledge to preserve the Woolworth Building and the civil rights history.

“I believe that the commitment from the mayor is powerful,” she said, acknowledging it was “certainly one of the reasons” she accepted the post.

Pierce, an African American arts advocate and civic leader, has served for the past year on the San Antonio Conservation Society's Coalition to Save the Woolworth Building. The building at the corner of East Houston and Alamo Streets opened in 1921 as the F. W. Woolworth 5-10 and 15 cent store.

“This adds another layer to the power of the Plaza,” Pierce said. “It adds another opportunity to tell another story of history - the history of the civil rights movement and the sit-ins.”

Carey Latimore, who Nirenberg also appointed to the 26-member Advisory Committee, is an associate professor of history at Trinity University who teaches African American studies. Last October, the Alamo Trust published Latimore’s study, commissioned by the city, on the history of desegregation in San Antonio.

Nirenberg said he appointed Viagran, a descendent of an Alamo defender, because she “has been a leader in the World Heritage designation for our community” and because of her “unwavering commitment to telling the entire story of the site.”

Treviño, who has been a key leader in the Alamo project, said in a written statement that he is “disappointed to be removed” from the Alamo Management and Advisory Committees. He added that the masterplan has “disintegrated,” and that he believes the city should pull out of the lease with the General Land Office and reallocate its $38 million commitment to other, more pressing needs.

Asked by a reporter about Treviño’s comments at that evening’s briefing, Nirenberg was blunt.

“Unfortunately the position that Councilman Treviño has taken — which is, that if the Cenotaph can't move, then the Alamo Plan is dead — is not tenable. It's not gonna move,” Nirenberg said. “So we have to redesign the plan around that reality, and that's what we're going to do.”

Treviño had also declined to give in to a mounting drumbeat from the community and from political leaders including Wolff to save the Woolworth Building. Instead, according to this Alamo Trust article, he favored creating a stand-alone civil rights institute in the Kress Builiding, four blocks away on Houston Street.

Although he co-authored a 2018 op-ed in the San Antonio Express-News with Nirenberg and Wolff titled, “Alamo Plaza Must Remain a Public Space,” the plan Treviño backed would have restricted public access.

In a March 1 memo to City Council, Nirenberg wrote that the committee replacements, appointments and steps toward a redesigned Alamo plan came after his discussions with Texas General Land Office Commissioner George P. Bush. Bush and Nirenberg are the Executive Committee over the Alamo project.

Nirenberg's memo said the modified plan “must consider key issues raised by our community,” including “repurposing the Woolworth and Crockett buildings,” street closures and public access to Alamo Plaza.

Nirenberg’s memo said the modified plan will “amend the project management structure and funding responsibility for each party.”

The memo said the parties have “conceptually discussed” that:
Nirenberg said the changes “represent a reset of the project” but remain within the project's vision and guiding principles.

He said the public will have an opportunity to provide feedback on the changes before city council votes on a new agreement some time in the next few months.