Police accountability activists have asked the FBI to probe the "continuous and systemic" harassment of volunteers who worked on the petition drive that landed Proposition B on San Antonio's May 1 citywide ballot.

That ballot measure — hotly opposed by the San Antonio Police Officers Association (SAPOA) — would strip SAPD officers of their ability to collectively bargain for new labor contracts. Supporters of the proposition say it's needed to rein in the union's protection of bad cops.

In a letter to the head of the FBI's local division, the San Antonio Coalition for Police Accountability alleges that volunteers on the petition drive, which began last fall, faced harassment from people who identified themselves as SAPD officers.

Individuals wearing the logos of both SAPOA and This Is Texas Freedom Force (TITFF), a group the FBI has called an extremist militia, also took part in the harassment, the group charges.

Neither SAPOA nor SAPD immediately responded to requests for comment on the correspondence.

The letter, signed by longtime civil rights activist and former city council member Mario Salas, says the coalition has photos of three encounters where volunteers faced harassment. One of those shots shows the license plate number of a blue pickup truck driven by an alleged harasser, he writes.

"San Antonio Police Chief William McManus was provided the photo image and he confirmed to me that the vehicle was registered to a San Antonio police officer," writes Salas, acting chair of the San Antonio Coalition for Police Accountability.

Salas also shared a photo with the Current that he said shows a man harassing a petition volunteer as she does her job. The man in the photo appears to be wearing a T-shirt prominently featuring a variation of TITFF's "Hold the line" slogan along with a badge and an SAPD logo. 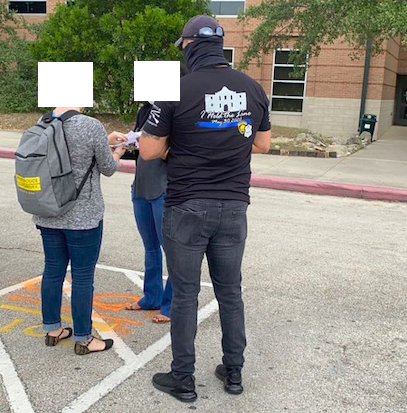 Salas' group is a coalition of roughly ten organizations fighting for police and criminal justice reform. It worked with Fix SAPD, the group behind Prop B, to collect signatures for its petition.

In recent weeks, SAPOA President Danny Diaz characterized the ballot measure as an effort to defund the police even though it would have no direct effect on SAPD's budget.

Volunteers affiliated with Fix SAPD recently shared accounts with the Current of being harassed and intimidated while collecting signatures. The group has also expressed concern that such incidents will ramp up in advance of the May 1 election — a concern Salas echoed in his letter.

"We are very concerned because the harassment and intimidation tactics appear to be increasing."

The coalition sent its letter to the FBI on Saturday. It also circulated copies to the U.S. Department of Justice, the American Civil Liberties Union and the Southern Poverty Law Center.

In the correspondence, Salas writes that at least six petitioners are willing to testify about their experiences should an investigation take unfold.


"We support the right of all Americans to express their political views, to assemble, to protest, to petition, to bear arms and indeed to exercise all of our cherished constitutional rights; however, we will not countenance threats, intimidation or violence against our members, volunteers or supporters," the letter reads.