Texas-based hate group source of 80% of all U.S. racist propaganda tracked in 2020 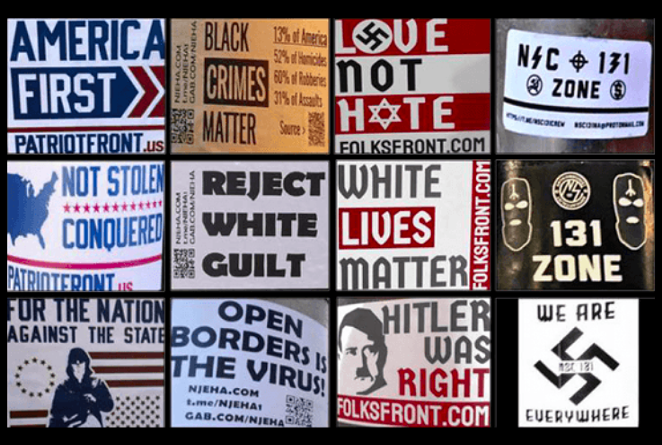 Texas-based group Patriot Front was responsible for 80% of racist, antisemitic and other hateful messages tracked in the U.S. by the Anti-Defamation League last year in its annual report on white supremacist propaganda.

Dallas-headquartered Patriot Front, which espouses racism and antisemitism and prominently uses former President Donald Trump's "America First" messaging, was responsible for 4,105 of the incidents cited in the report. Texas also had the highest number of appearances of racist propaganda messages last year at 574.

“We’re concerned about this increase in white supremacist propaganda, especially since Patriot Front, a Texas-based organization, is responsible for much of it,” said Mark B. Toubin, ADL's Southwest regional director.

“White supremacists use these techniques to bolster recruitment and spread fear by targeting specific groups, including the Jewish, Black, Muslim and LGBTQ+ communities, as well as non-white immigrants," he added. "We’re watching this activity very closely.”

The FBI recently reported that hate crimes in the U.S. rose to their highest level in more than a decade. Anti-Asian attacks have also grabbed headlines during the pandemic, and eight people, including six Asian women, were shot dead at Atlanta-area spas on Tuesday.

Last year marked the highest level of racist propaganda incidents since ADL began tracking the hate messages — an average of 14 per day. The 2020 total of 4,822 was nearly double the number reported the prior year, according to its report.

The ADL found at least 30 organized white supremacist groups distributing  propaganda last year. However, Patriot Front, along with New Jersey European Heritage Association and Nationalist Social Club, made up a trio responsible for 92% of the activity, according to the report.