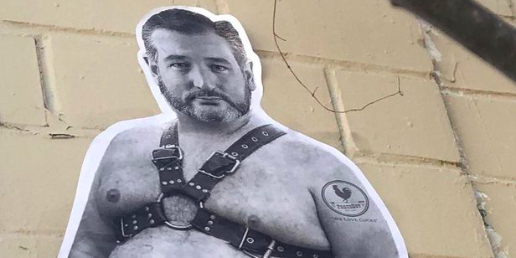 Twitter is aflame with Ted Cruz mockery after a user shared a snap of a San Antonio wall sticker depicting Texas' junior senator garbed in leather bondage gear and with his prestigious gut bearing a "Proud Boy" tattoo.

Clearly, the sticker, spotted on the St. Mary's Strip, is tweaking Cruz for egging on January 6 insurrection with his repeated — and debunked claims — that voter fraud undermined the 2020 election. The far-right Proud Boys were among the groups whose members sacked the U.S. Capitol to demand Donald Trump be handed a second term.

So far, much of the online response to the sticker has been of the I-love-this-even-though-I-cannot-unsee-its-hideousness variety. Because even though Texas keeps reelecting Ted Cruz, plenty of Texans are sickened by him.

Add a ball gag and it'd be unimprovable.

My eyes will not forgive you for posting this but my gut thanks you for the laughing work out.

This needs to be a fathead(https://t.co/ElpqWzW8pX). I would start a gofundme to send 1000's of them to "Fans of Ted," who would plaster them all over his home city.

You know, just for a goof.

Given the response, it seems like a safe bet these stickers will soon proliferate well beyond the St. Mary's Strip.