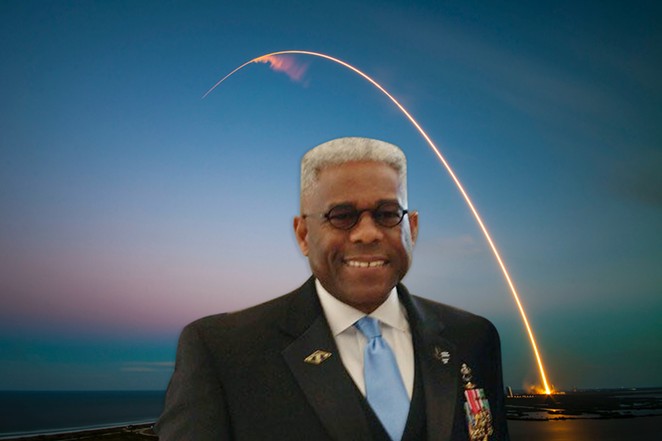 Texas GOP Chairman Allen West has amped up his calls for Texas to secede, but not just from the United States. The Tea Party firebrand wants the Lone Star State to become its own cosmic body.

“It is absolutely possible,” West insists. “I recently saw a documentary called Avengers: Age of Ultron. This robot man was able to lift a country called Sokovia into space. But a group of super-power supremacists kidnapped all the people and destroyed it before they could get free of the atmosphere. I don’t think we’ll have that problem. Texans love our guns just as much as our freedom, and we have plenty of Mossberg tactical shotguns and AR-15s to defend ourselves.”

West first started talking about secession after the 2020 presidential election. He's openly supported a bill allowing Texans to vote whether to break free of the United States.

“No one takes me or Texit seriously,” West said. “But that’s going to change once they see that we’ve become our own freedom-, fossil fuel- and Second Amendment-loving planet.”

West outlined his plans at a recent meeting of the Poteet chapter of the International Flat Earth Society.

Under the proposal, only rural, Republican-leaning counties and the Houston suburbs — home to NASA and most of the state’s fuel refining — would be eligible for secession. West would leave behind San Antonio and other urban areas, which he called “cesspools of criminal liberalism.”

West, who served one term as a Florida congressman before relocating here, said fracking has already broken loose the parts of Texas he and his supporters plan to fire into space. He added that he’s in negotiations with billionaire Elon Musk to build the rockets that will enable the launch.

Musk issued a two-word statement from his new home in Austin: “Allen who?”

“This is a bold move that we never considered because it seemed less practical than Texit,” said George Konstantinidis, global exit adviser for the Texas Nationalist Movement. “But there’s some logic to it. In space you don’t have to worry about being sandwiched between hostile nations, no one can relocate from California, there will be no illegal immigration and people can’t desert when it literally falls apart.”

“The best part is we’ll all have our cherished individual liberties,” West said. “No one will be forced to wear a space suit for oxygen. It will be each Texan’s personal choice.”