For years, Gloria Gutierrez worked with children as a Dallas elementary school principal.

Now, the 73-year-old retiree is working with kids again, spurred on by the heartbreaking, months-long journey unaccompanied minor asylum seekers must endure to reach South Texas.

She wanted to help, so she’s now among the volunteers assisting with some 2,000 teenage boys housed at a makeshift federal shelter at Freeman Coliseum in San Antonio. Late last month, the U.S. Department of Health and Human Services reached a 60-day lease with Bexar County to house unaccompanied minors there as it became overwhelmed by a surge in border crossings.

“My motivation was the humanitarian aspect,” Gutierrez said. “Why is this happening? Have we done something in their home countries to cause this? We need to do a deep dive. Until then, we have to care for our fellow humans the best we can.”

On April 7, Gov. Greg Abbott called a press conference at Freeman, announcing that the state had received tips that one or more of the minors had been sexually abused. Before the start of a state investigation or even his own tour of the site, Texas’ Republican governor demanded that the Biden administration close the shelter.

The White House subsequently announced the Department of Health and Human Services would investigate the governor’s allegations, but it’s made no move to close the site.

As Texas elected officials make political hay out of the Biden Administration’s handling of the latest surge in unaccompanied minors and migrants at the border, volunteers at shelters say they’re more concerned with helping than in partisan squabbling.

Because preparations were behind schedule when Gutierrez arrived at Freeman to volunteer, Homeland Security employees pushed her and the others to work at a frantic pace.

“People were super friendly and caring,” she said. “But when I got home, I was so tired. I haven’t been tired like that since I was a principal. I put my feet up, turned on the news, and saw the governor say how bad conditions were inside. I was so ticked off.”

‘I call them my niños’

Before she could enter Freeman, Gutierrez, like all volunteers, needed a criminal background check and a COVID-19 test. After passing both, she was issued an official ID and received training.

Gutierrez drew the assignment of folding fresh gym shorts, T-shirts and underwear into packages for the residents, all boys 13 to 17. The youths receive the new clothes in exchange for the dirty ones they came in wearing. She also prepared bedding and filled duffle bags with sweatpants, socks, shorts and sneakers for new arrivals.

The teens are staying at Freeman while the Office of Refugee Resettlement works to find trusted family members who can safely house them after their release. It’s a difficult task, volunteers say, since many of the teens don’t have contacts or know precisely where their U.S. relatives reside.

While refugee-assistance groups such as San Antonio-based RAICES have called on the feds to be more transparent about the conditions inside the temporary shelters, officials have yet to invite journalists inside Freeman to make independent reports on the conditions. Much of that reporting, therefore, comes down to the observations of volunteers.

Gutierrez said the vast shelter, created from a pair of expo halls, is split into numbered “pods.” Each pod has 30 beds, six to a row, five to a column, where the teens sleep. Tape on the floor distinguishes one pod from another. There are no walls.

Miriam de la Paz, 67, volunteered to help make the expo halls habitable before the minors arrived. Once the teens reached the site, she was assigned to look after those in Pod 12.

“I was someone to reassure them they would be OK, we weren’t going to hurt them,” she said. “I welcomed them with open arms. I got that back and more, so many hugs and cuddles. The boys are very strong. I call them my niños.”
When the first busload of minors arrived at 2 a.m. on March 30, de la Paz was shocked to see one 13-year-old so tiny he barely passed for 6.

“I was 13 when I came here as a political refugee from Cuba in 1967,” she said. “The boys were scared. I understand their fear, the fear of the unknown.” 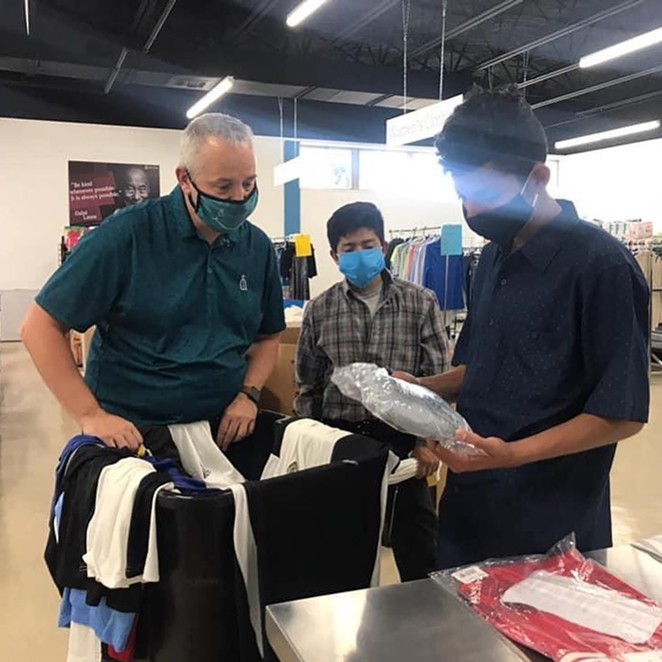 The volunteer experience in San Antonio differs from what Andrea Duarte-Alonso, 24, observed in Laredo, where she worked with asylum-seeking families.

Duarte-Alonso, a second-generation Mexican American, recently took two weeks off from her job at the Immigrant Law Center of Minnesota to volunteer for Catholic Charities. She helped coordinate transportation for more than 30 Cuban, Honduran and Venezuelan families who ended up in U.S. Customs and Border Protection facilities.

“I met with immigrants and refugees in my hometown, but I’ve never seen people who have been within one day of crossing the border,” she said. “My background is social justice-oriented. I want to become an immigration attorney.”

Reflecting on her first time at the U.S.-Mexico border, Duarte-Alonso said she only understood the borderlands through the media. She expected the Border Patrol to be unkind.

“Maybe I was lucky to see good Border Patrol agents working with the migrants,” she said. “I still question how others are being treated. Asylum seekers told me they wore the same clothes for three days in a row at Border Patrol stations.”

A former resident of the Des Moines, Iowa area, Duarte-Alonso said she wants newly arrived immigrants to feel welcome and have some sense of what it’s like to live in the United States. After a father from El Salvador recently released from custody mentioned he was on his way to Iowa with his young son and daughter, she shared her own experiences living in the American Heartland.
“When I told the father I know Des Moines, his eyes opened wide and he asked, ‘What’s it like?’” Vicente Verino, a 63-year-old volunteer at the Holding Institute, a shelter in Laredo where Border Patrol sends asylum-seeking families, said his search to find a purpose in life through service to others was long and hard.
That journey started when he was recruited into the drug trade as an 8-year-old paperboy in Laredo. A customer angry that Verino stopped delivering confronted him outside a corner store.

“I told him, ‘You don’t pay me. That’s why I stopped,’” said Verino. “All of a sudden, another guy comes. He opens my newspaper sack and puts something inside. He said, ‘That’s your payment.’ It was a bunch of marijuana.”

Verino brought his “payment” to teenagers who bought the weed. The sale triggered an obsession with money, and by 13, Verino was sneaking ten-pound bags onto the Greyhound bus to San Antonio. Eventually, he was busted for smuggling 1,500 pounds of pot north, a shipment that would have netted him $45,000.

Verino went to prison, and his mother, father and eldest brother died before his 2005 parole in 2005. Drunk and homeless, he bottomed out. Then he found God.

Volunteer work helped him sober up and turn his life around, he said.
At the Holding Institute, Verino assists 125 residents — families largely from Honduras and Guatemala — before they travel to their final destinations throughout the U.S.

“God changed me very differently than how I lived before,” Verino said. “Money was an addiction. I don’t want to get paid now. The refugees are in need, and I want to help.”

Back at Freeman Coliseum, a few teens told volunteer de la Paz that when they saw daylight stream through the windows there, it was the first time they’d seen the sun since entering custody at the border.

When she last volunteered, about a week ago, de la Paz said the boys were allowed to kick a ball around outside in small groups for 30 minutes a day. One she met was allowed to make three phone calls to his family in the U.S., but no one answered. He worries his relatives may never call back.

“They need to be understood and to be loved. I can give my boys that,” de la Paz said. “But I can’t promise when they’ll get out, because I don’t know.”