Medicaid expansion picks up bipartisan support in the Texas House, but hurdles remain 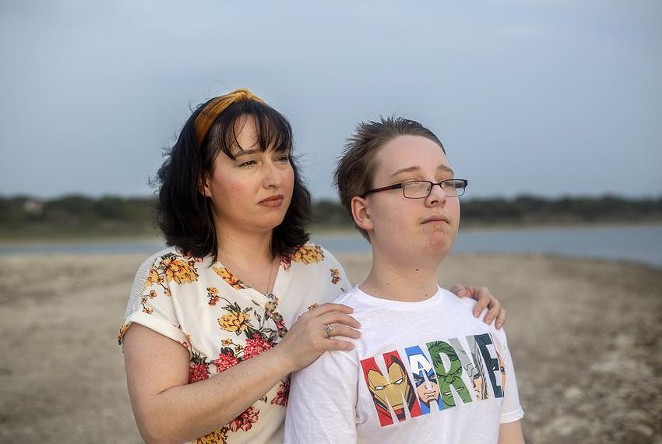 When a neighbor’s dog nipped her hand near the fingernail last winter, Trish W. put off going to the doctor because it didn’t seem worth the dent it would put in her already tight budget.

It wasn’t until her hand swelled to the point where her finger nearly burst that she finally gave in.

The doctor told Trish, a 33-year-old from Canyon Lake who has a genetic blood disorder that hinders her ability to fight bacteria, that she’d narrowly escaped deadly sepsis and that she could have lost her hand. The hospital kept her overnight to be sure. She later received a $2,000 bill that she couldn’t afford.

“Of course as a single mother, you're thinking, ‘Oh, my God, I might not leave this hospital,’” said Trish, who asked that her last name not be used in order to protect her family’s privacy. “‘This could be the last time I see my kid.’ And that’s terrifying.”

It’s a scenario she might have avoided with a Medicaid card, but her pay as a certified nursing assistant, which she said can reach $1,700 "on a good month," means she makes too much to qualify under Texas eligibility rules — but not enough to buy her own insurance.

“I fall right in that gap,” said Trish, who lives in an RV with her 12-year-old son.

Texas lawmakers have been presented with billions of dollars in federal incentives this year to join 38 other states in expanding the state-run Medicaid program to adults like Trish who earn up to 138% of the federal poverty level.

Among several bills filed in the conservative Texas Legislature is a Medicaid expansion plan with bipartisan support that is similar to those adopted in some Republican-led states.

Nine House Republicans and all 67 House Democrats have publicly signed on to House Bill 3871, which would give it enough votes to pass the 150-member chamber. Although none of the proposals have gotten a hearing this session, Medicaid expansion is expected to be introduced in some form as a floor amendment Thursday when the House debates the state budget.

First introduced as part of President Barack Obama’s Affordable Care Act in 2010, the requirement to expand eligibility for Medicaid was fiercely resisted by Republican-led states, including Texas, on the argument that it was fiscally unsustainable and, equally importantly, expanded an entitlement program when the goal should be to make people less dependent on the government.

Since then, however, all but 12 states have expanded their Medicaid programs.

Texas, meanwhile, has relied on a federal funding agreement, known as the 1115 waiver, that was first approved in 2011 as a means to help hospitals care for uninsured people until the states expanded their Medicaid programs under the ACA. Then the U.S. Supreme Court ruled that states couldn’t be required to expand Medicaid.

In the years after, Texas leaders fought to keep the waiver — which doesn’t provide comprehensive health care coverage, drug coverage or other services covered by Medicaid — while resisting expanding Medicaid.

The new federal incentives, combined with news last week that Texas may lose its 1115 funding after October 2022, bring a new pitch to the decadelong debate over adding more than a million people to the Medicaid rolls in Texas.

“The time to do this is now,” said state Rep. Julie Johnson, D-Carrollton, the author of House Bill 3871. “The deal on the table that the [federal] government offered to us is, in my opinion, irresponsible not to accept.”

Conservative lawmakers are weighing their historic opposition to Medicaid expansion against the potential of billions in federal incentives coming to Texas during a tight budget cycle.

“There is a bipartisan desire to see the cost of health care decrease. The unsustainable increase in prices, whether at the hospital, the doctor, or in health insurance premiums hits all Texans,” GOP state Rep. James Frank, chair of the House Human Services Committee, said in emailed comments to the Tribune. “But there is also concern that when Medicaid expands, that adds pressure to the private insurance market to make up the difference in reimbursements. Hence, expansion is a hidden tax on those who have private insurance, driving up the cost of care for everyone.”

Some 4.2 million people are on Medicaid in Texas — including more than 3 million children. The rest of the recipients are people with disabilities, pregnant women and parents living below 14% of the federal poverty level. Adults with no disabilities or dependent children don’t qualify for Medicaid, and the vast majority of children on Medicaid have parents who do not qualify.

Texas has the highest rate of uninsured residents in the nation.

If Texas expanded Medicaid, the federal government would bump its reimbursement to the state from 62% of Medicaid expenditures to 67% — and it would pay 90% of the costs for the estimated 1.4 million adults who would become newly eligible for the program.

A recent report by Texas A&M University and sponsored by the Episcopal Health Foundation showed that an estimated 954,000 newly eligible adults would likely enroll, bringing $5.41 billion in federal matching dollars to pay for them each year. The Kaiser Family Foundation, a health care research organization, estimates that about 75% of the newly eligible would be people of color.

Economists predict that expansion in Texas would be an economic driver, increasing health-related spending, decreasing uncompensated care spending by local governments and raising productivity with a healthier workforce.

“It’s really critical at this point that Texas be looking at solutions for our worst-in-the-country insurance rates,” said Anne Dunkelberg, who oversees health care policy for Every Texan, a public policy group.

But state leaders and many Texas conservative groups have so far chosen to decline the expansion.

Lt. Gov. Dan Patrick’s and Gov. Greg Abbott’s offices did not respond to requests for comment, but both have opposed expanding Medicaid in the past. In January, House Speaker Dade Phelan expressed doubt that Medicaid expansion would happen this session.

“I think it’s unfortunate to put a price on the heads of those that are most vulnerable,” said David Balat, director of the Right on Healthcare initiative at the conservative Texas Public Policy Foundation. “We’re talking about people that are not getting the greatest of care, stand to get worse care and we’re saying we should probably just take the money anyway. That's unconscionable.”

"We exist, and we matter"


The Medicaid legislation getting the most attention in the Legislature this session are companion bills filed by Johnson in the House and state Sen. Nathan Johnson, D-Dallas, modeled after programs in conservative states like Ohio and Indiana.

The identical bills offer incentives for recipients to achieve self-sufficiency and independence through health savings accounts, employment assistance and healthy behavior rewards, rather than cultivating an attitude of state dependency, said Nathan Johnson, whose Senate Bill 117 is awaiting a committee hearing. The legislation would also increase provider reimbursements to encourage physicians to accept more Medicaid patients.

Medicaid expansion would also potentially generate hundreds of thousands of jobs and bring in billions in additional tax revenue to the state and to local governments, according to a recent analysis by The Perryman Group, an economic research firm in Waco.

“I’ve got to ask my colleagues, ‘How much are you willing to reject, in order to not provide health care to people for free? In order to not have people healthy enough to go to work?” Nathan Johnson said. “There’s a narrative that says, ‘We created the Medicaid program to help the truly vulnerable, the elderly, the disabled, the children. We’ve taken care of everything. Everybody else, you’re on your own.’ And that just refuses to look at reality.”

Better reimbursements for doctors and the personal responsibility incentives are the two biggest reasons why House Republican Rep. Steve Allison, a San Antonio freshman and co-author of House Bill 3871, said he signed on to the legislation after years of skepticism.

“In the past, we just talked about expanding coverage and didn't talk about care. I've always been stuck on care,” he said. “The incentives, too, are so important. … I think that's what's starting to move some of the Republicans, because that's been a legitimate concern in the past. That we’re just further promoting welfare.”

But first it needs to reach the House floor. Frank, a Wichita Falls Republican, said he has not decided whether to allow a hearing on the House bill.

“I remain convinced that there are better ways for Texas to improve access and affordability of health care for all Texans than Medicaid expansion,” Frank said, adding that he worries Medicaid expansion could drain the state budget over time and lead to fewer private employers offering health benefits to workers.

Earlier this month, Phelan, Frank and other House members from both parties championed a set of bills called “Healthy Families, Healthy Texas” that Frank said would improve quality of care and health care access “for all 29 million people in the state.”

They include measures to reduce the cost of some prescription drugs for uninsured people, make it easier for children on Medicaid to continue coverage during income verification processes, require transparency in medical billing, expand availability of telehealth and broadband services, and increase insurance plan options through small businesses, agricultural nonprofits and associations, among others.

They also supported a bill expanding Medicaid coverage for new mothers to 12 months after the birth of a child, up from the current two months.

In Canyon Lake, what the politicians do at the Capitol could have a big impact on Trish, whose son inherited the same blood disorder and does have Medicaid coverage. If they expand Medicaid, she could stop having to make the difficult choice between paying for her own health care or putting food on the table and keeping the lights on.

“It’s not like we’re going to go see a doctor every chance we get,” she said. “It’s just to have that card in your back pocket to go get a physical or see a doctor if there’s an emergency. It means a lot to people like us. We exist, and we matter, and we don’t deserve to be treated like trash on the bottom of someone’s feet.”

Disclosure: Texas A&M University, Episcopal Health Foundation, Every Texan and the Texas Public Policy Foundation have been financial supporters of The Texas Tribune, a nonprofit, nonpartisan news organization that is funded in part by donations from members, foundations and corporate sponsors. Financial supporters play no role in the Tribune’s journalism. Find a complete list of them here.