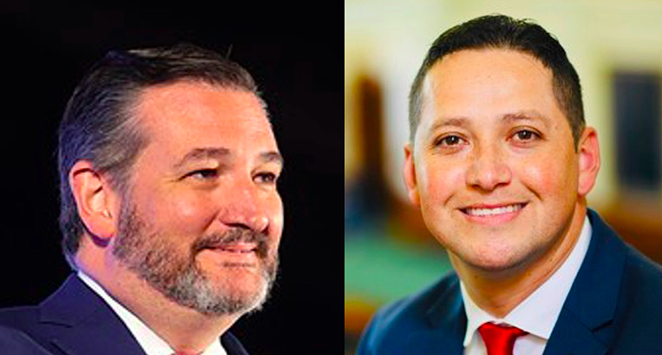 Some Republicans aren't exactly thrilled that the GOP has rebranded as the POT, or Party of Trump.

Given the numerous claims from Texas Republicans that widespread fraud cost Donald Trump a second term as president, it should come as little surprise that 19 members of the state's 24-member GOP delegation earned failing grades of "D" or "F."

U.S. Sen. Ted Cruz, among the most vocal Washington politicians in attempting to delegitimize the election, earned an "F." Freshman U.S. Rep. Tony Gonzales of San Antonio, a Trump endorsee, was among those with a "D."

The highest-scoring Lone Star State Republican only eked out a "B-" on the report card. But more on that later.

Nationwide, just 14 House and Senate Republicans earned an "A" from the Republican Accountability Project, which operates as part of the organization Defending Democracy Together founded by prominent Trump critic Bill Kristol. In contrast, more than 100 received an "F."

The grades were based on four factors:
Cruz's failing grade came down to him being on the wrong side of history on all four counts, while Gonzales earned his low mark for voting against certifying Electoral College votes, repeatedly questioning the legitimacy of the election and voting against impeachment.

Sen. John Cornyn, who's vacillated between portraying himself as a moderate and serving as a key Trump enabler, earned a grade of "C-." Cornyn rejected the articles of impeachment against Trump, and he repeatedly questioned the election results. Even so, he didn't sign onto the Texas brief, nor did he object to the certification of Electoral College votes.

While known as a conservative bomb thrower, San Antonio-Austin U.S. Rep. Chip Roy was the only member of the Texas delegation to earn higher than a "C" on the report card. Roy didn't vote to impeach Trump. However, he never claimed the election was illegitimate, nor did he sign on to the Texas brief or vote against certifying the election results.