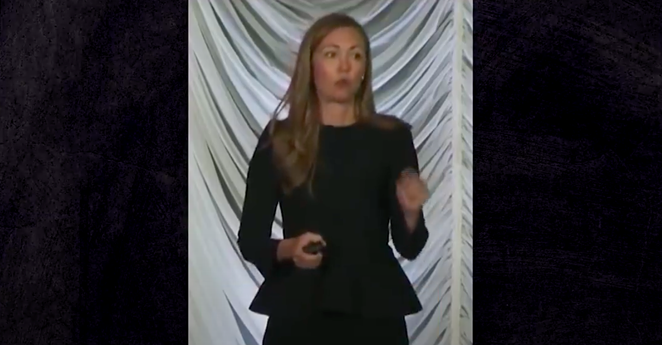 The leader of a top conservative group bragged to donors about helping write one of Texas' new voting restriction bills in a leaked video shared Thursday by Mother Jones magazine and watchdog group Documented.

The video purportedly shows Jessica Anderson, executive director of Heritage Action for America, at an April 22 meeting in Tucson, telling big donors that her group crafted Georgia's voter-suppression law and is repeating the effort in Texas and other red states.

In the clip, Anderson says the dark money group penned “19 provisions” in Texas' Republican-backed House Bill 6, which would place more restrictions on voters in Texas, already one of the hardest places to vote in the country.

“In some cases, we actually draft [the bills] for them,” said Anderson, whose group is affiliated with the conservative Heritage Foundation, “or we have a sentinel on our behalf give them the model legislation so it has that grassroots, from-the-bottom-up type of vibe.”

Among other things, Texas' HB6 would make it illegal for election officials to send mail-in ballots to people who don't specifically request them. It would also slap criminal penalties on election workers who try to remove partisan poll watchers they worry are intimidating voters.

“Gov. [Greg] Abbott will sign it quickly," Anderson said, according to the Mother Jones report.

Supporters of the Texas' voter restrictions bills argue they're intended to ensure election integrity, despite no proof of widespread election fraud in the state. Voting-rights groups argue the bills — which echo former president Donald Trump's unfounded claims of a rigged election — are meant to keep poor people, people of color and other likely Democratic voters away from the polls.

In the video, Anderson said Heritage is spending $24 million in Texas and seven other states, creating "this echo chamber" demanding more restrictive voting laws. She added that her organization coordinates a weekly call with other right-wing groups to marshal their efforts, according to Mother Jones.

“We literally give marching orders for the week ahead,” Anderson said. “All so we’re singing from the same song sheet of the goals for that week and where the state bills are across the country.”

In response to the video, Anderson provided a statement to Mother Jones saying her group had been "transparent" about its recommendations to lawmakers, adding "we won’t be intimidated by the left’s smear campaign and cancel culture.”

The Texas Democratic Party said the leaked video is proof that Republicans, who control all the levers of power in the Lone Star State, are trying to maintain power by suppressing votes.

“The GOP lost the presidency, the House, the Senate and a lot of ground in 2020 — but instead of addressing the real problems Texans face, they continue their race to the bottom by appealing to right-wing extremists and putting forward wildly unpopular and discriminatory policies," Texas Democratic Party Chairman Gilberto Hinojosa said in an emailed statement. "They are letting outside interests like Heritage Action control them and try to tell Texans how to live and how to vote. It won’t work."

“This video proves what we’ve known all along: anti-voter bills like those in the Texas legislature are part of a coordinated, national voter suppression effort,” he said in an emailed statement. “Low voter turnout used to ensure comfortable win margins for Republicans, but higher turnout has made the state more competitive in the past two election cycles - that’s the real reason behind these suppression bills."