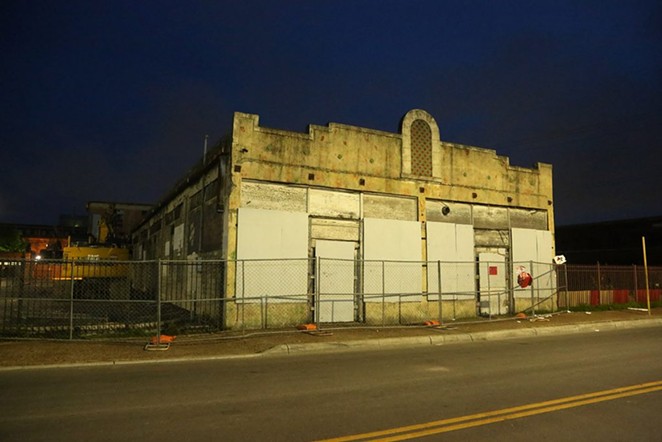 The city Historic and Design Review Commission (HDRC) voted unanimously in an emergency hearing on Wednesday to support a proposal from the city’s Development Services Department to demolish part of the historic Whitt Printing building in west downtown while preserving its façade and concrete structure.

The vote comes less than a month after the commission denied the request of the Lim family, which owns the building and the adjacent Golden Star Café, to tear down the building to make the site more attractive to developers. Since then, the family has taken its case on a bold and unusual path through the city’s historic approval process — asking the city to remove the historic designation altogether — while activists and neighborhood groups from the West Side and elsewhere have rallied to preserve the building.

The family will now drop its request to have the designation stripped, its attorney Patrick Christensen said at the meeting. The request had been on the agenda of the City Council’s meeting on Thursday.

The decision on what to do with the 90-year-old building, 821 W. Commerce St., now lies with the Development Services Department and its director, Michael Shannon, after an anonymous complaint last week led him to inspect the building and designate it as a case of “emergency demolition by neglect” — in other words, he declared it structurally unsound and a hazard to the public.

That designation led to talks between the city, the Lim family and the Conservation Society of San Antonio on how to stabilize the structure while preserving its historic character, resulting in the proposal that HDRC considered on Wednesday.

The proposal would remove infill in the building’s walls ¬– including the cinder blocks seen on much of its exterior – and its wooden roof, which is in a state of collapse, while bracing the historic façade.

Once the building is stripped to its concrete frame, the family will consider using it as a patio for its restaurant, Christensen said at the meeting. It plans to tear down a two-story brick building behind it, he said.

The building is in the Cattleman Square Historic District, and the city has declared it a historic landmark due to its use as a printing house for Spanish-language publications for much of the 20th century. Gilberto Whitt founded the Whitt Printing company there after fleeing the Mexican Revolution in 1914, and the business operated there until 1977, according to a report from HDRC.

Bo Lim, a member of the Lim family and co-owner of building, told the commission that the snow storm in February and recent hailstorms had caused the building to deteriorate.

“We’re just a small restaurant trying to stay alive during a pandemic climate,” she said. “We’re not a big-time developer with deep pockets, we’re just regular people trying to make a living. Our concern right now is just to make sure that that building does not fall on somebody. Do these people care if it falls on somebody?”

Velma Peña, chair of the Westside Neighborhood Association Coalition, said that preservation on the West Side “is more important than ever as we see so much of it demolished.”

“This is particularly true in this part of the West Side, in which entire neighborhoods have been decimated because of city incentives and policies,” she said. “As the building environment disappears, so does our history. The Whitt building is an important part of that history. We are asking that you honor the commitment that was made the day it was landmarked in the ‘80s by saving it now.”

Members of the Gardendale Neighborhood Association, which includes the building, and several customers of the Golden Star left comments in support of demolition.

“I eat at this restaurant, and when I park I am concerned, even though it’s roped off,” said northside resident Greg Garcia. “This building needs to be demo’ed, torn down, due to public safety.”

On Tuesday, the city and the Lim family were discussing a proposal in which only about a fifth of the building’s concrete structure would be preserved, but the proposal “continued to evolve as we worked on it to find the best way to save as much as possible,” said Shanon Shea Miller, director of the city’s Office of Historic Preservation, in a text message.

Members of the HDRC showed little hesitation in supporting the proposal agreed upon by the city and the Lim family.

“In general, I’m in support of the proposal,” commissioner Scott Carpenter said. He expressed hope “that someone can formulate a redevelopment plan that incorporates this, that gives uniqueness to the site.”

“This has been done in a number of developments here in San Antonio,” he said. It is “a hallmark of our city that we don’t just obliterate those memory elements of our communities.”