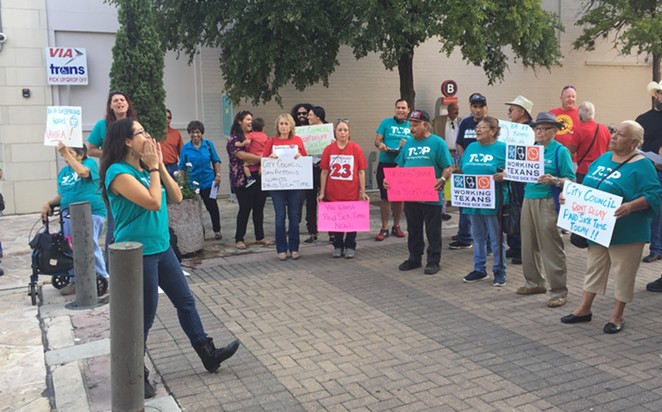 In the waning hours of Texas’ 87th legislative session, House Democrats staged a walk-out to kill a sweeping Republican effort at voter suppression. Little-noticed in the moment, the dramatic move also nixed a top priority of the business lobby for the last three years: a measure to stop Texas cities from passing virtually any local pro-labor policy.

“Small business owners are deeply disappointed and frustrated by our elected leaders,” said Annie Spilman, Texas director for the National Federation of Independent Business (NFIB), in response to the sudden demise of Senate Bill 14. “Small business owners … don’t have the time or the resources to navigate a confusing and contradictory patchwork of local ordinances.”


Had it passed, SB 14 would have banned any local policy that requires employers to provide paid sick leave, rest breaks, or stable work schedules. It would have also squashed “ban-the-box” ordinances that shield job applicants with criminal convictions from discrimination. Business groups like NFIB, backed by billionaires like the Koch family, argue that such measures spell doom for bosses with slim profit margins and make compliance difficult for companies operating in multiple cities. In Texas, just a few such local policies actually exist, though they’ve increased in recent years.

In 2010 and 2015, respectively, Austin and Dallas passed policies mandating that construction workers receive rest breaks every four hours. With its massive building industry and sweltering summers, Texas is the deadliest state in the nation for construction laborers, and there is no federal mandate for rest breaks. In a bid to reduce deaths, the nonprofit Workers Defense Project successfully pushed the rest break measures. Austin also maintains an ordinance preventing employers from asking about criminal history prior to extending a job offer, and voters in the North Texas suburb of Euless recently approved a proposal requiring large employers to provide work schedules at least 10 days in advance.

“SB 14 would make the Texas construction industry even deadlier than it already is,” said Emily Timm, co-executive director of Workers Defense, at a demonstration last month focused on defending the rest break policies. “And you put that in the context of every year the average temperatures climb higher with climate change, and that means [lawmakers] want to take local rest breaks away at the very time we need stronger protections.”

SB 14 made it through the Senate in April with unanimous Republican support plus Brownsville Democrat Eddie Lucio Jr., and looked on pace to pass. Then, in the House, labor advocates successfully convinced legislators to water down the bill by shielding rest break and ban-the-box ordinances. The Senate could have agreed to the changes, but chose instead to go to a conference committee, where a group of mostly Republicans stripped the protections. The delay pushed final approval of the bill to the last minute. When House Democrats snuck out of the Capitol late Sunday night to stymie the Republicans’ attack on voting rights, they also killed a handful of lower-profile measures that sat beneath it on the House Agenda — including SB 14.

“It’s the Lt. Gov. [Dan Patrick] and it’s the ideology of the NFIB and their kind of holy war on workers’ rights — it’s a scorched earth approach and I think it burned them in the end,” said Rick Levy, president of the Texas AFL-CIO. “That bill would be law today if they had gone along with the reasonable compromise the House crafted.”

It was the second time Republicans had failed to pass a bill like SB 14. In 2019, a similar measure failed, angering employer advocates. Now the business lobby’s hopes lie in one or more special legislative sessions later this year, which Governor Greg Abbott has pledged to convene. The governor sets the agenda for such sessions. Amid contentious battles over voting and legislative redistricting, Republicans may get their third crack at erasing local worker protections.