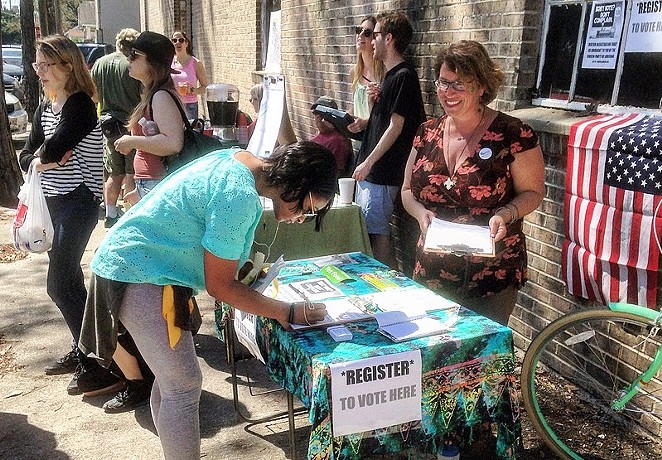 Staring down a reboot of the restrictive, GOP-backed voting bill that died at the end of Texas' last legislative session, state Democrats on Tuesday unveiled a voter registration program targeting young people and communities of color.

The program, dubbed Project Texas, aims to sign up at least a million Democrats out of the state’s three million unregistered eligible voters through a mix of field operations, door knocking, digital ads and other methods.

The initiative comes as Republicans, in the wake of the 2020 election, have introduced bills in nearly every statehouse that would make it more difficult to vote. While GOP officials defend the measures as "election integrity" legislation, voting-rights groups argue they're intended to keep people of color away from the polls to suppress Democratic votes.

Democratic lawmakers shut down Texas' bill using a walkout at the end of the recently concluded legislative session. However, Republican Gov. Greg Abbott has said he'll make a revamp of the bill a priority during a special session he plans to call.


“This spring, Republicans made their strategy clear: they are so afraid of being voted out of office that they are simply trying to stop Texans who don’t agree with them from voting," Texas Democratic Party Chief Strategy Officer Luke Warford said. "Voter registration is an immediate and concrete way we can fight back — by helping more Texans get to the ballot box."

Texas Democrats will run a pilot version of the program this year to test which tactics work best. After narrowing it down to the most effective ones, the party will kick registrations into high gear in 2022, which include both federal midterm elections and statewide contests.

Of Texas' 2 million unregistered likely Democratic voters, half are Latinx, 20% are Black and a quarter are 25 or younger, according to the Texas Democratic Party. Outreach to those groups will be key to flipping the Legislature and statewide offices, which have long been in Republican control.

Alex Birnel, advocacy manager of MOVE Texas, a nonpartisan San Antonio-based group that mobilizes young voters, says he welcomes "any massive investment to get more voters onto the rolls."

However, Birnel said Democrats shouldn't focus solely focused on the state's largest counties, adding that it will be essential for the party to take their message to rural communities and the Rio Grande Valley if it's to make meaningful change in the state.